Popular Posts
6 Reasons Why Lucca is My Favourite City...
Where to Stay in Malta for Uncertain First...
5 Awesome Czech Castles to Check Out
5 Tips to Make the Most of Visiting...
5 Reasons Why You Really Must Visit Palermo,...
Photo Series: The Magnificent City of Gdansk
9 Things to Know Before Visiting Poland
A Wanderer’s Sightseeing Guide to Valletta, Malta
Best Places to Visit in the Czech Republic...
9 Things to Know Before Visiting Romania
Home Romania Visiting the Gothic Masterpiece of Corvin Castle, Romania 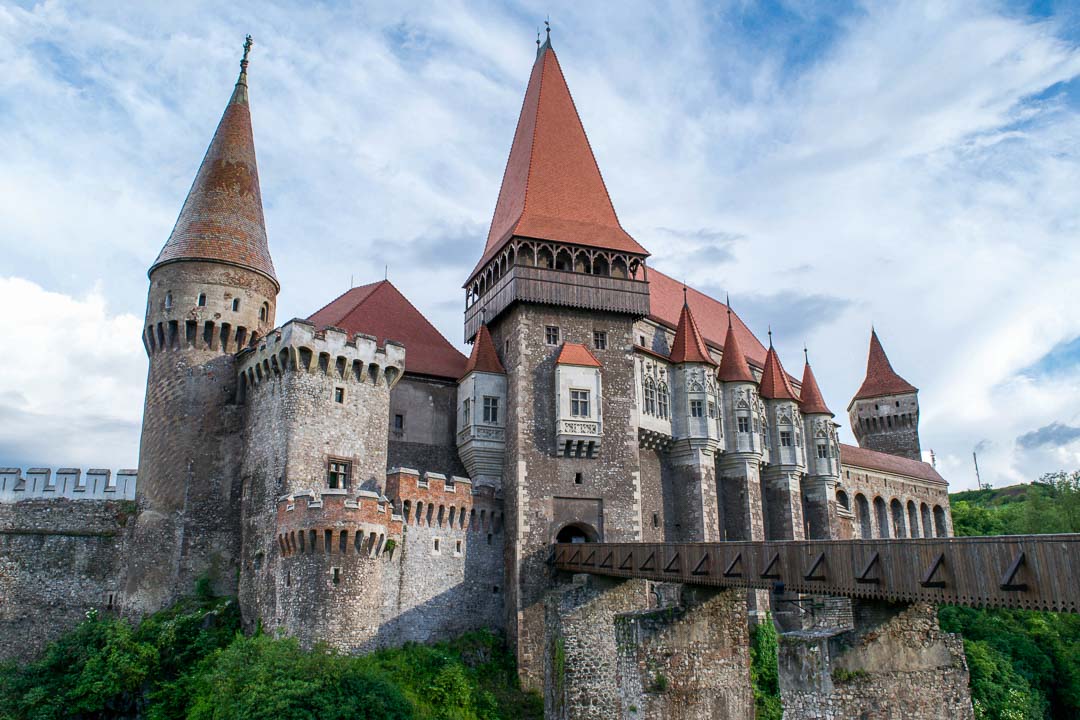 Romania is known for having many beautiful castles throughout Transylvania and one of its most elegant and stunning is Corvin Castle. Also known as Hunyad Castle or Castelul Corvinilor, the castle is found in the small city of Hunedoara, west of the country’s centre. What makes Corvin Castle so fascinating is that it genuinely looks like the kind of castle you imagine in fairytales and fantasy sagas.

From every angle, this incredible landmark simply enchants those that venture to visit it. What follows is a look at this most impressive of castles, and what it’s like exploring the halls and towers while you visit Corvin Castle.

The History of Corvin Castle 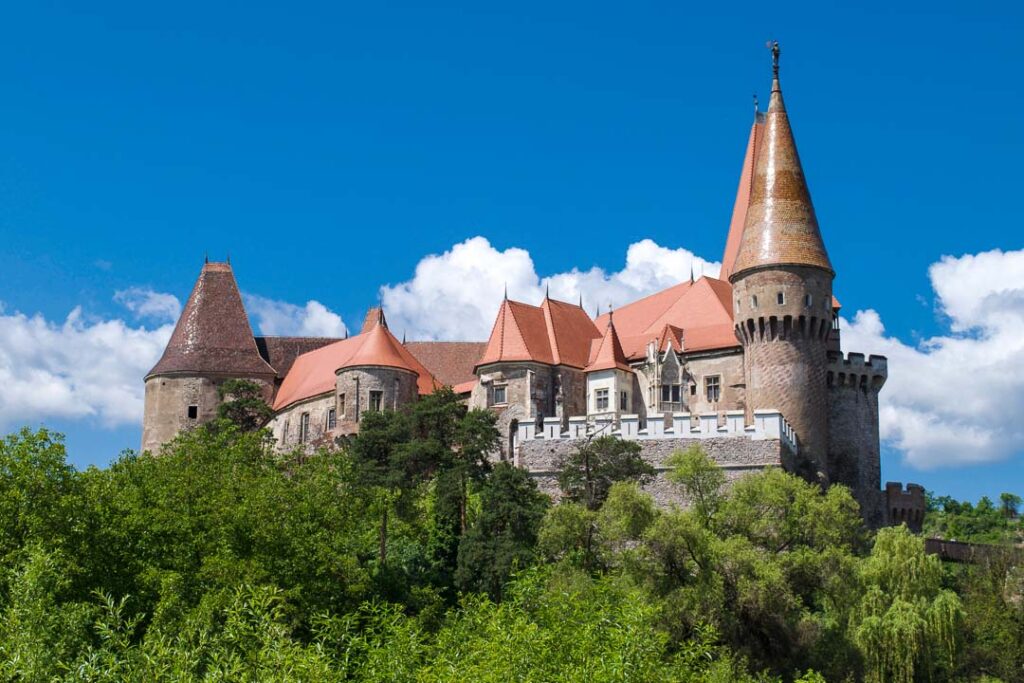 Originally started by John Hunyadi – a voivode or regional governor of Transylvania – in 1446, the castle’s construction halted after his death in 1456. Built over another fortification on land presented to his father by the King of Hungary, it features a Gothic-Renaissance design.

Some years later, work continued and was completed in 1480. In the 17th century, substantial modifications were made to the castle including to the council hall and chapel. What stands today is the result of many waves of restoration undertaken during the 20th century, each with its own approach and aesthetic. Whether historical fact or not, it is often claimed that John Hunyadi held Vlad the Impaler prisoner here for an indeterminate length of time. For those looking to see all the sights relating to this fascinating historical figure, Corvin Castle is a worthy inclusion. 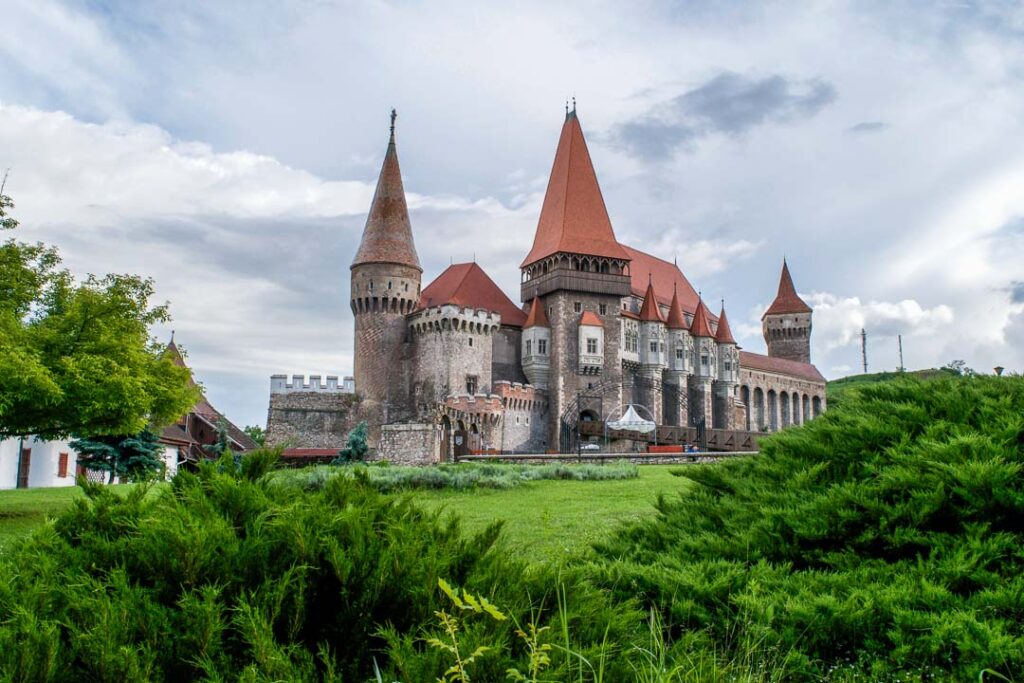 Situated away from the centre of the city, it’s either a bit of a walk or an easy drive to the castle. Once there, visiting Corvin Castle isn’t an overly complicated experience. Depending on which way you approach the castle, either the above photo or this one below will be your first view. To be honest, it is hard to get past that first look you get when approaching the castle.

As you approach the castle, you’ll find yourself on the opposite side of a green moat from it. I found myself walking back and forth across the edge of the moat, trying to capture it from all different angles. The impressive wooden bridge that spans the moat and small river really is quite neat in its own right. 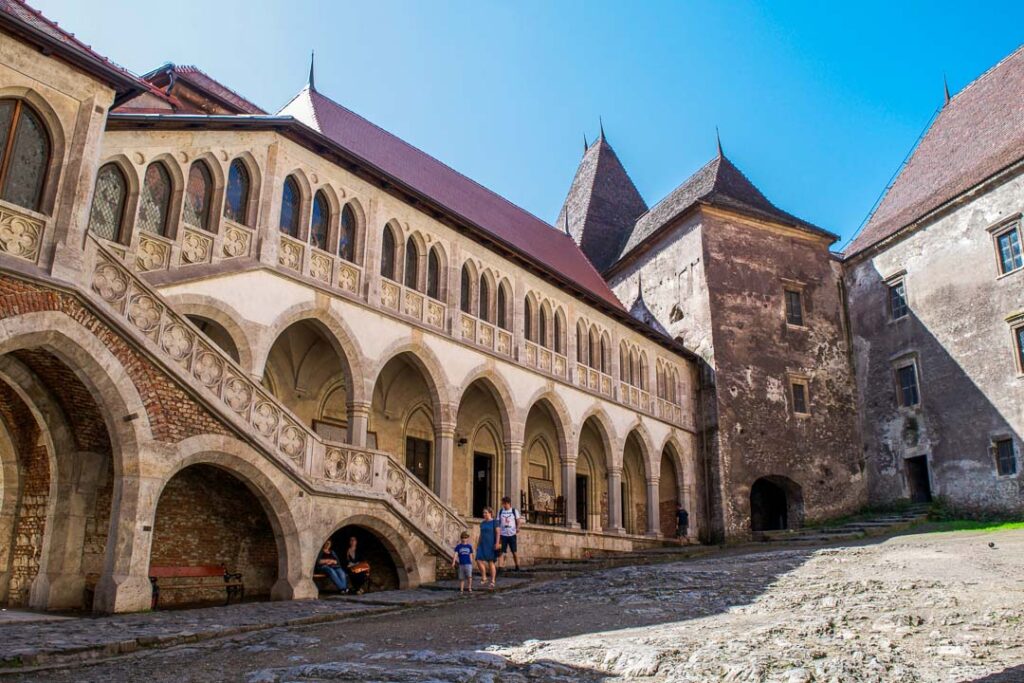 Once across the bridge and paid the entrance fee, you’ll find yourself in the main courtyards. With its very unconventional shape, the main courtyard, is bordered by two two-tiered terraces and an elegant staircase. As with the moat, you can’t help but move about and admire it all from every angle. You’re bound to notice that some sections of the castle look in much better state than others, especially from up on the balcony.

Having seen the courtyard, it’s time to take a look inside. Without doubt the most impressive room inside is the council hall, with its big stone columns and banners hanging. You hardly need any imagination to picture knights feasting inside this hall. 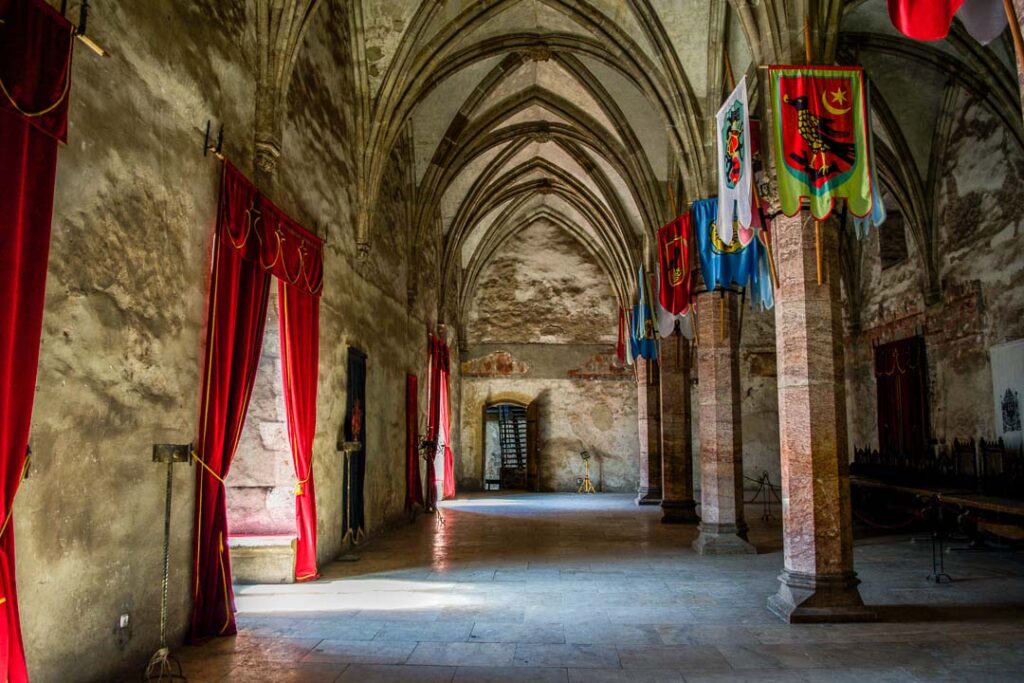 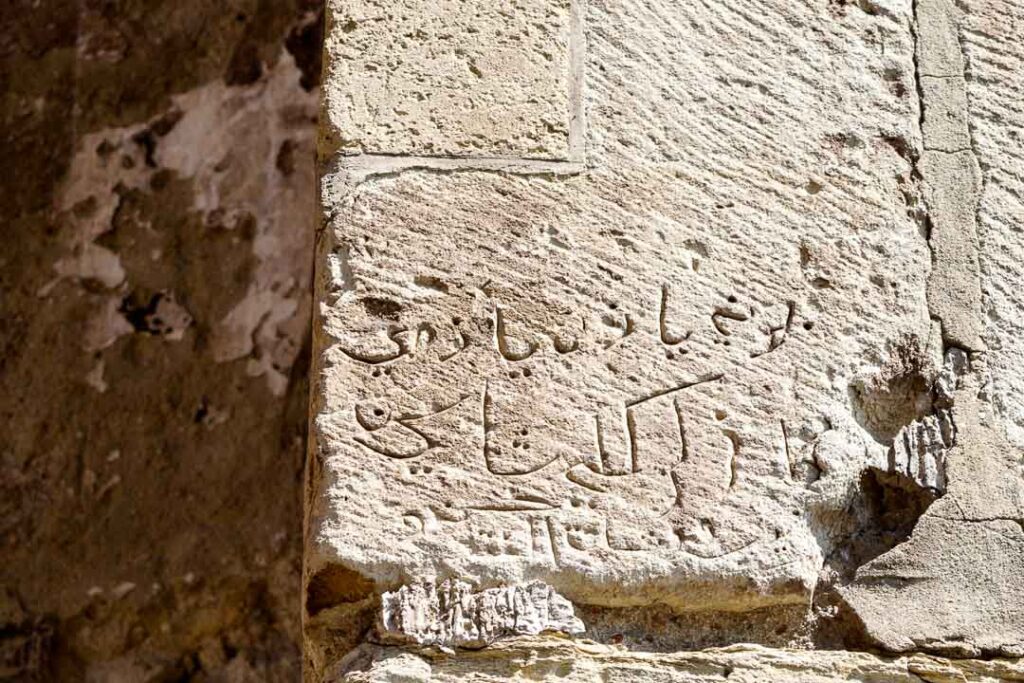 One of the more fascinating stories of Corvin Castle revolves around an arabic inscription referring to the castle’s well. Dug by three Turkish prisoners, they were promised freedom upon completion by John Hunyadi. However, when he died and the well was completed, John’s wife Elisabeth reneged on the promise and sentenced the prisoners to death.

As a final wish, they asked they be allowed to carve an inscription in stone. Unbeknownst to Elisabeth,  the inscription states “You may have water, but you have no soul“, what I think to be a fantastic remark. What the actual inscription seen above says was a bit unclear as the information board also suggested it was a different remark. It’s also possible it reads “The one who dug here is Hassan, prisoner to the giaours in the fortress next to the church“. Either way, the story is an interesting one.

Where to Stay near Corvin Castle 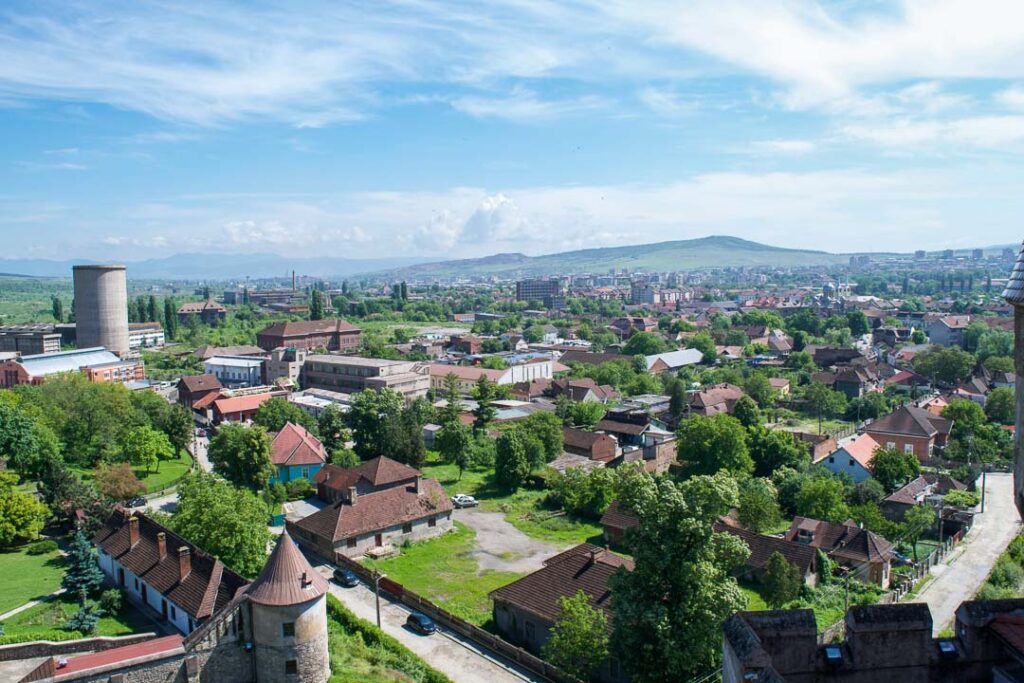 When planning on visiting Corvin Castle, you have a few options available to you. The first and most obvious is to stay in Hunedoara itself, which has a small variety of accommodation on offer. For my stay I chose the aparthotel Vila HD, which with a kitchen and big supermarket close by, I was able to cook for myself. The downside to staying in Hunedoara is that there really isn’t anything else to see there aside from the castle.

Another alternative is the nearby city of Deva, which has more accommodation options and sights on offer. A small shuttle bus runs every 15 minutes between the Deva and Hunedoara train stations, costing just 6.5 RON. This makes Deva quite viable as an alternative. Further afield is the city of Alba Iulia, but transport will likely become more complicated there. 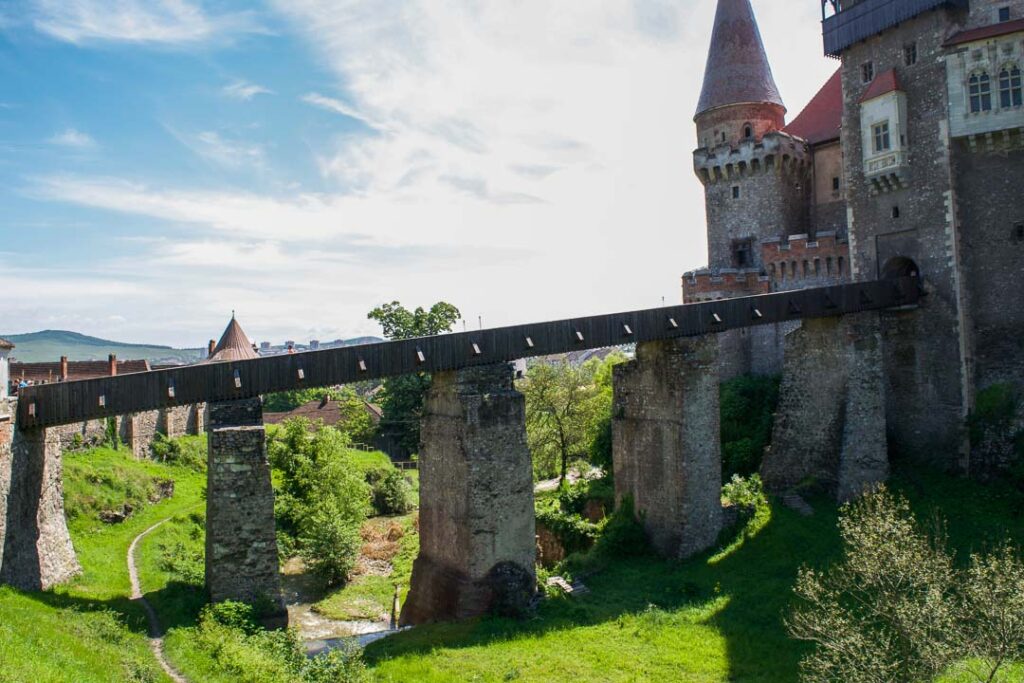 The entry fee for adults is 30 RON and to take photos is an additional 5 RON, a common occurrence at Romanian tourist attractions. This entrance fee grants visitors unguided access to the castle.

Update (Sept 2018): The castle now has a website, so you can find information here.

Have you visited Corvin Castle? What was your experience like? Do you agree that this looks like a fairytale castle? Please share in the comments below.

What are the Essential Things to Do in Brasov, Romania?

11 Sights to See in Cluj-Napoca, Romania

9 Things to Know Before Visiting Romania

Great post, great castle and great information you shared with us. I will recommend to visit Rhodes Greece and the Palace of the Grand Master of the Knights of Rhodes if you like castles!

Thanks Elena. I’d love to visit Rhodes, I’ll keep this in mind. I do love castles!

I love a good castle, and this one is a beauty! What an entrance, I LOVE that bridge and the turrets?! Amazing! Beautiful photos, and thanks for providing the detail to enable us to visit!

Yes, that bridge is something special, isn’t it? Glad you enjoyed the article Angie. Hope you get to return to Romania one day.

Thank you Caroline. If you like castles, then I definitely recommend visiting Romania – Corvin castle is not the only nice one there.

How did I miss this before!? Good read to prep for our honeymoon! Have you got a post for Peles Castle or Bran Castle? We’ll be going to those too!

It’s an oldie haha. I did write about Peles and Bran here 🙂 http://www.travelsewhere.net/day-trips-brasov/

Oh yes, I have that pinned already too! 🙂 Good, I’m not missing anything!

Love this article, thanks so much! The castle has a website now: http://www.castelulcorvinilor.ro/ if you want to update it 🙂

Glad to hear Maartje and thanks for the link, I’ll add it in first chance I get.

Hey there! I'm David, author of the Travelsewhere blog. During my travels, I love searching far and wide for lesser seen places to share with you, be they small historic towns or great hiking destinations. To learn more about me, click here.