Popular Posts
How to Purposefully Spend a Day in Cartagena,...
How To Make the Most of a Day...
A Quick Look at Things to Do in...
6 Compelling Reasons to Visit Zaragoza, Spain
Visiting the Gothic Masterpiece of Corvin Castle, Romania
How to Spend One Day in Lleida, Spain
Free Sights to See When Visiting Valencia, Spain
Cycling and Camping on Rottnest Island, Western Australia
5 Reasons Why You Really Must Visit Palermo,...
9 Things to Know Before Visiting Estonia
Home Italy 5 Reasons Why You Really Must Visit Palermo, Sicily

5 Reasons Why You Really Must Visit Palermo, Sicily 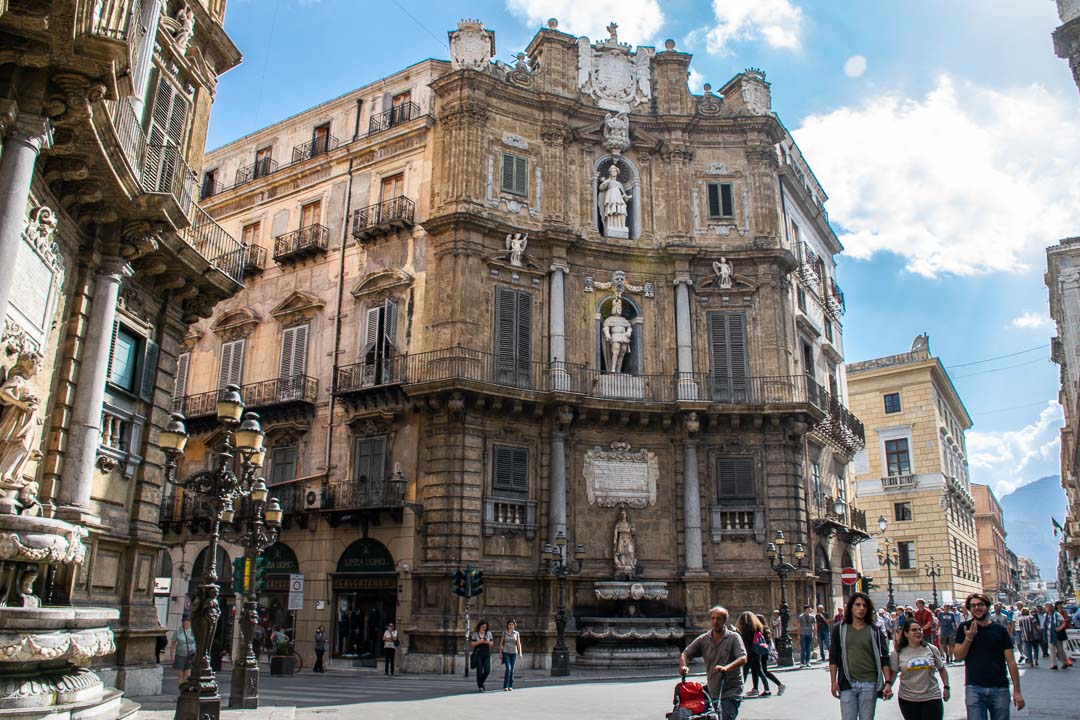 Despite my enduring excitement to travel around Sicily, there was one major destination I wasn’t overly anticipating. Palermo may be the capital city of Sicily, but I must admit I had an unflattering image of the place in my head. So I was welcomingly surprised to visit Palermo at the end of my trip and really enjoy the city. Sure, it had the drawbacks many big cities suffer from, but the highlights here more than made up for them.

When it came to visiting Sicily, my key interests had been in seeing scenic towns like Ragusa and the ancient ruins of Agrigento. The big cities held a lot less appeal, especially a place like Palermo with its (outdated) reputation as rundown and home to the infamous mafia.

Thankfully I didn’t let these minor doubts stop me from fitting in two days in Palermo, because the city is most definitely worth visiting. If you need convincing, here are some reasons to experience the city, along with some ideas about what to do in Palermo sprinkled throughout. 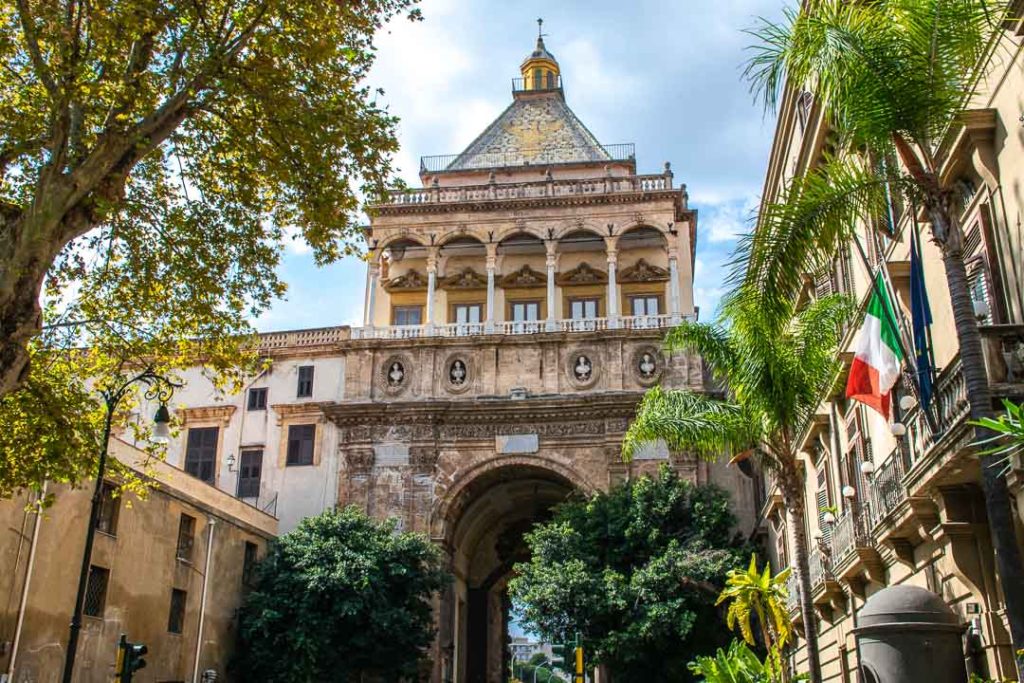 Before my visit, the impression I had of Palermo was that it was a rough and rundown kind of place. That’s often the case in parts of Europe’s bigger cities after all, but the city’s history with organised crime seemed to create a harsh image in my mind. And yes, while parts of the inner city did show signs of wear and tear, it certainly wasn’t as pervasive as I expected.

In fact, I’d argue Palermo can be quite a beautiful city to explore, especially around its historical centre. The old town of Palermo is rife with grand palaces and elegant corners that are quite impressive even if they show signs of wear and tear. You need only look to the well-trodden junction at Quattro Canti to see the city’s charms. On each corner of this confined square you have Baroque fountains and statues that create an instantly memorable attraction. 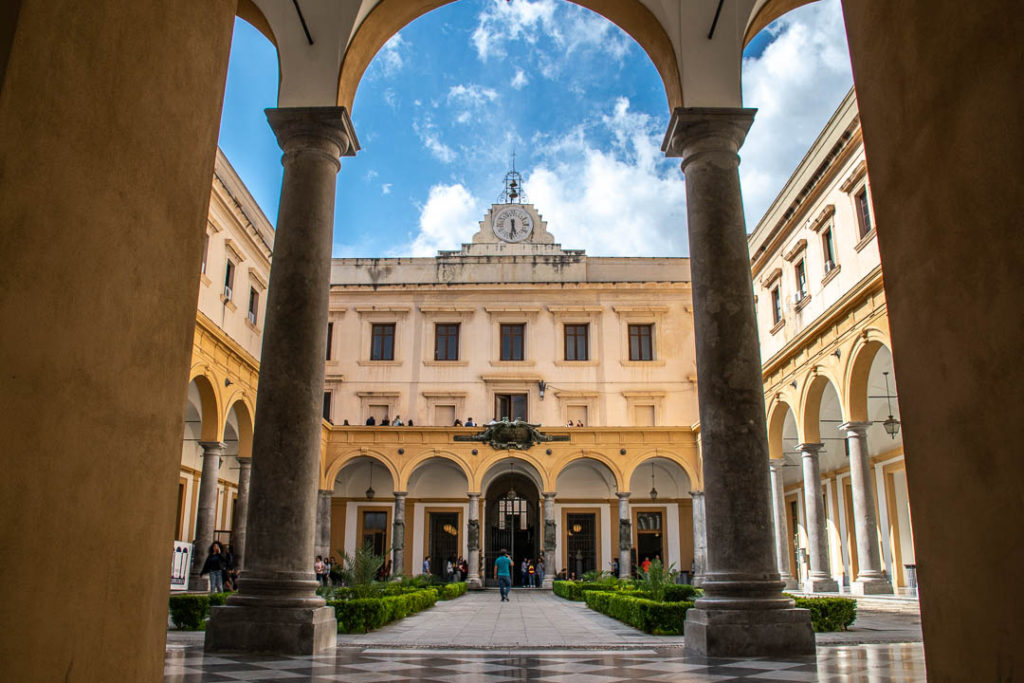 It’s actually useful to use Quattro Canti as a point of reference when sightseeing because you’ll find plenty of refined buildings and squares all around the intersection. In fact, just behind the square you have the stunning Fontana Pretoria and several palaces all with character and style.

A Vast But Walkable City 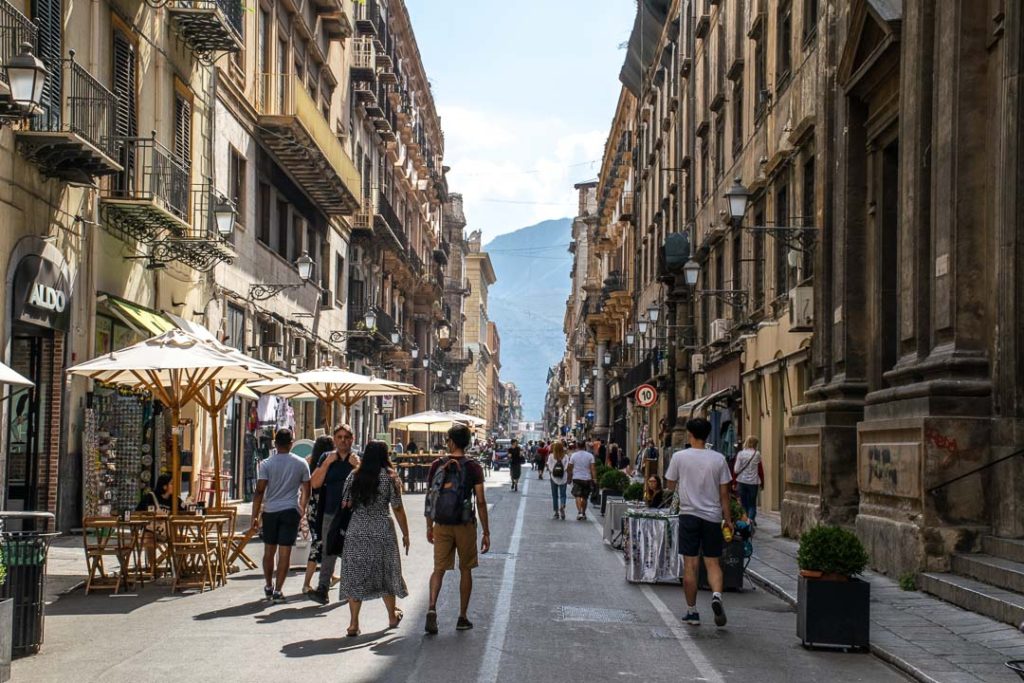 Once you venture into the old town of Palermo two things should be immediately clear about the city. One is that Palermo is a seriously sprawling space. That’s no surprise since Palermo is the largest city in Sicily and one of the largest in Italy. The other though is that Palermo is quite an easy city to navigate and get about. In fact, you can pretty comfortably walk around its historic centre.

A large part of this walkability is due to two streets that forge through the historic centre of the city. Via Maqueda and Via Vittorio Emanuele are great long pedestrian streets that meet at Quattro Canti, the previously mentioned square.

Like a tourist highway, these two streets link up many of the main Palermo attractions. They also happen to run through to Palermo Central Station and the port, although they’re no longer pedestrian-only at those points. 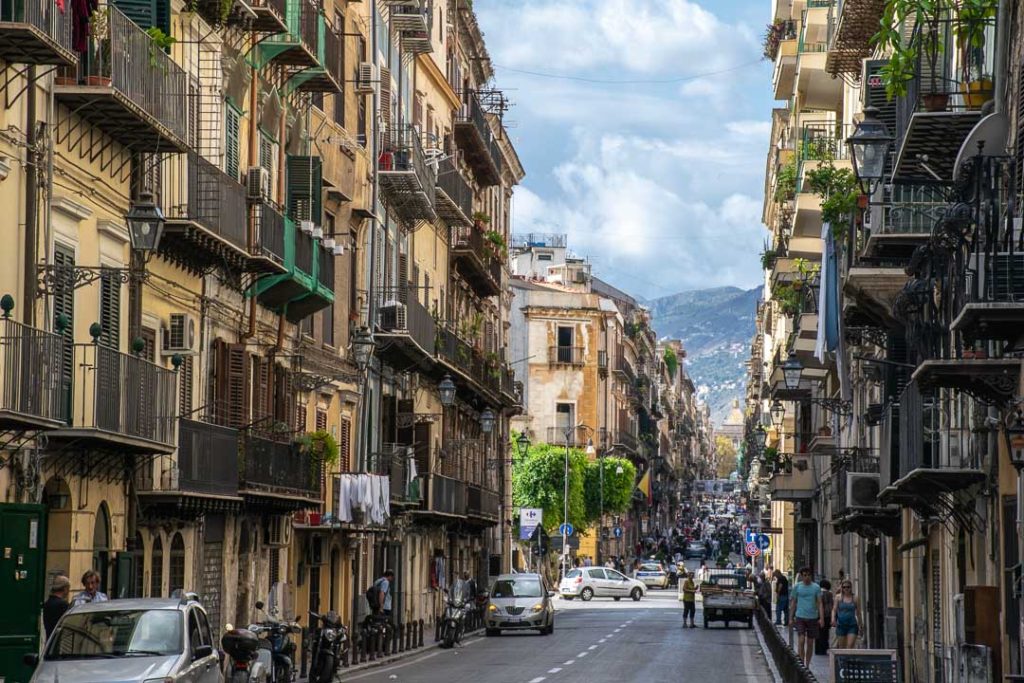 These aren’t the only streets tourists should explore mind you. As always, I encourage you to wander around and see the backstreets, especially those in the Kalsa neighbourhood. The point is more that you’ll definitely become quite familiar with Via Maqueda and Via Vittorio Emanuele during a visit here. If you’re not feeling too confident exploring on your own, consider doing a walking tour to settle in, whether it be a food tour or a cultural tour. 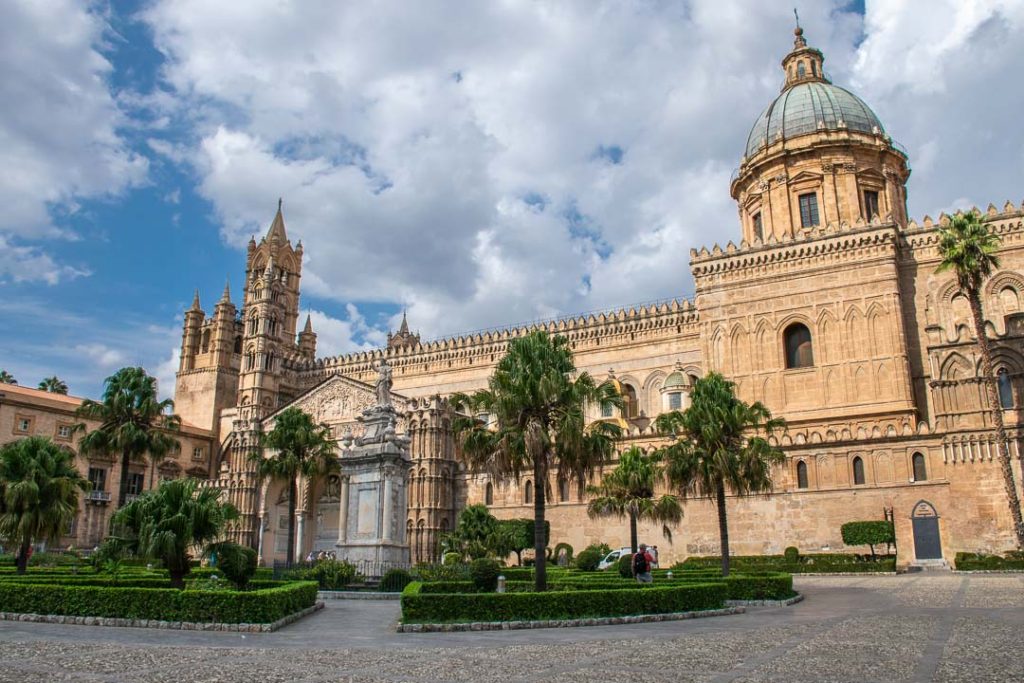 The idea that you should visit a cathedral when travelling in Italy is hardly ground-breaking. And yet, I can’t ignore the fact that there are not one, but two, cathedrals to interest those visiting Palermo. Both are major Palermo sightseeing spots and widely considered some of the most important in all of Sicily.

First off there’s the Palermo Cathedral, the most important place of worship in the city. While the size of Palermo Cathedral is definitely noteworthy, it’s hard not to focus on the building’s distinctive look. A blend of all sorts of architectural styles, it’s seen many additions since the Normans started it in 1185. Somehow though the Norman, Moorish, Gothic and Baroque exterior elements combine to great effect.

The inside is a little less monumental, but don’t miss the Sundial Meridian Line decorated with the zodiac. This ingenious addition from 1801 uses a narrow hole to cast light on the meridian, indicating the exact time of noon each day upon the current sign of the zodiac. 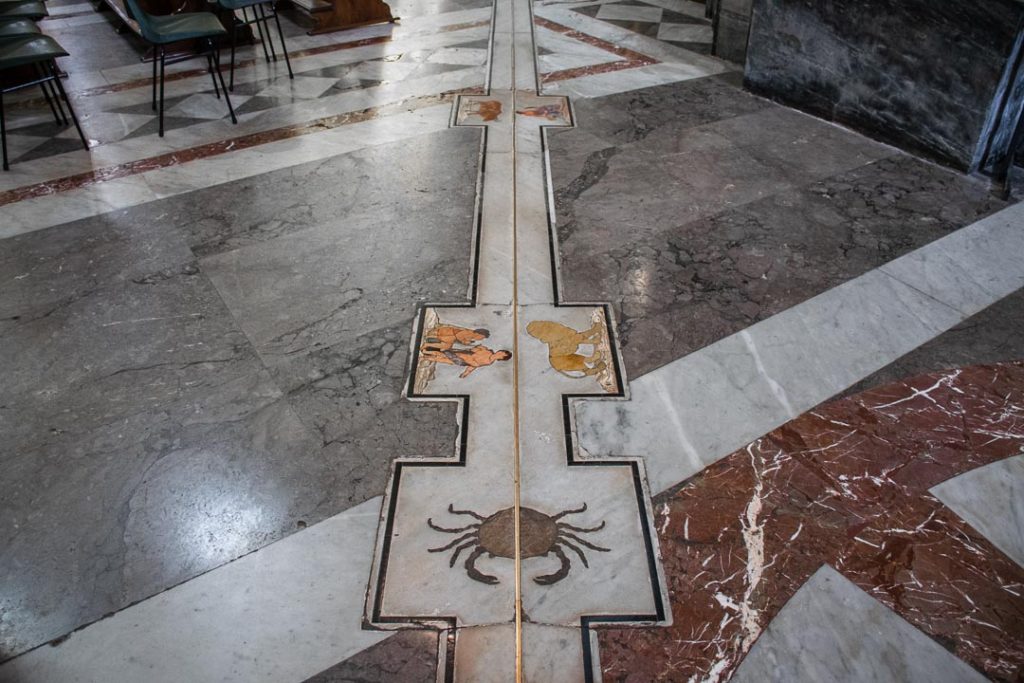 Then we have the other cathedral tied to Palermo, even if it lies outside the city limits, the Monreale Cathedral. This famous attraction sits in the small town of Monreale in the hills west of the city and actually predates Palermo Cathedral.

My biggest regret about my trip to Palermo is not having time to visit here because all I’ve heard is good things. I also quite like the story behind Monreale Cathedral, which was said to have been deliberately built in Monreale by King William II out of spite against the bishop of Palermo. 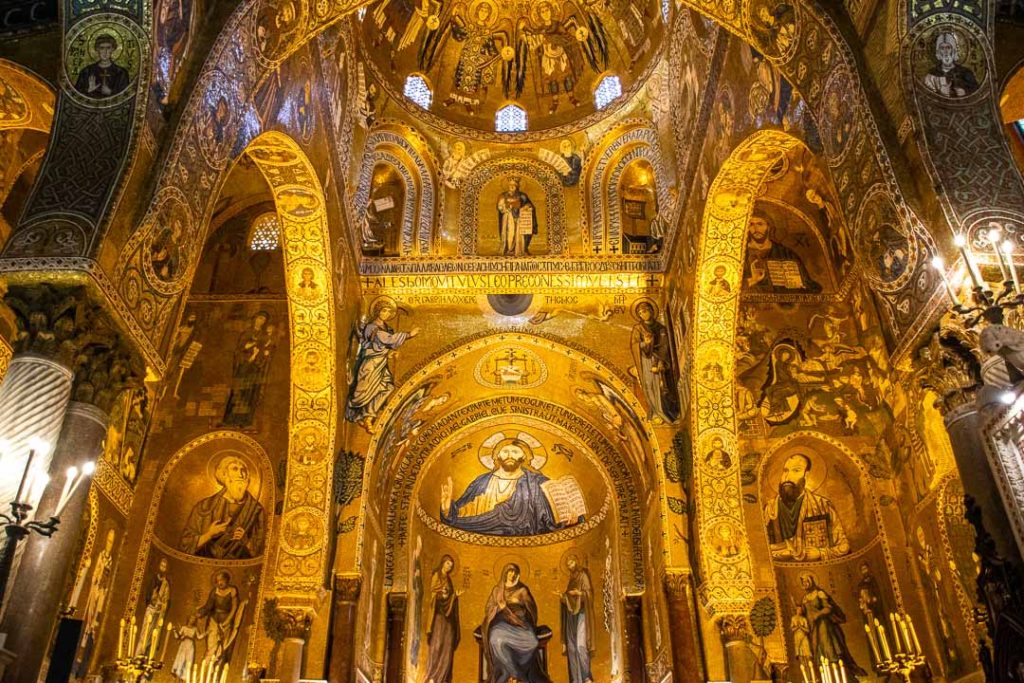 Having touched briefly on the history of Palermo, it’s worth digging further into this compelling side to the city. Palermo is home to a wonderful collection of landmarks that belong to the Arab-Norman Palermo UNESCO World Heritage site. These sites showcase the way Sicily’s Arab and Norman periods blended, both in terms of design but also culture.

By far the best place to witness this is at the Palermo Norman Palace. From the Normans on, this was the seat of power for those who ruled the island. While this palace may not look particularly special from afar, step into the Norman Palace and it becomes clear that this is a Palermo must see attraction. The central courtyard of the palace gives you a real sense of scale and shows that the castle’s clearly seen additions since the 9th century. 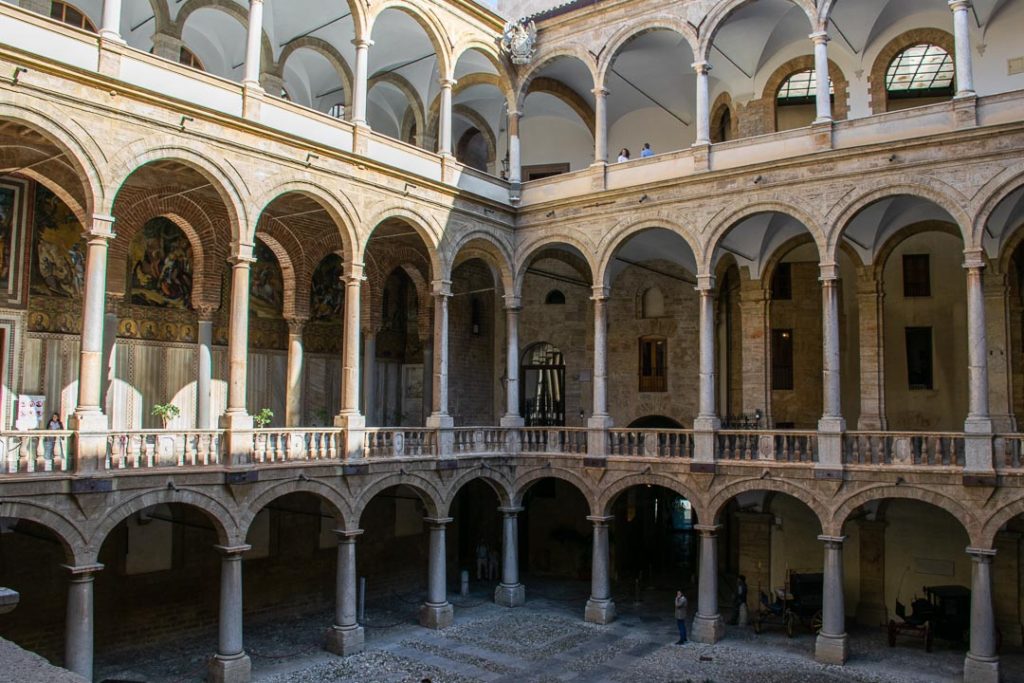 Richly covered in golden mosaics from the Byzantine era, it’s among the most beautiful chapels I’ve yet to see. But alongside the Norman and Byzantine elements, it also features a painted Islamic ceiling called a muqarnas. Each element alone is impressive, but to have them all together is truly one-of-a-kind. 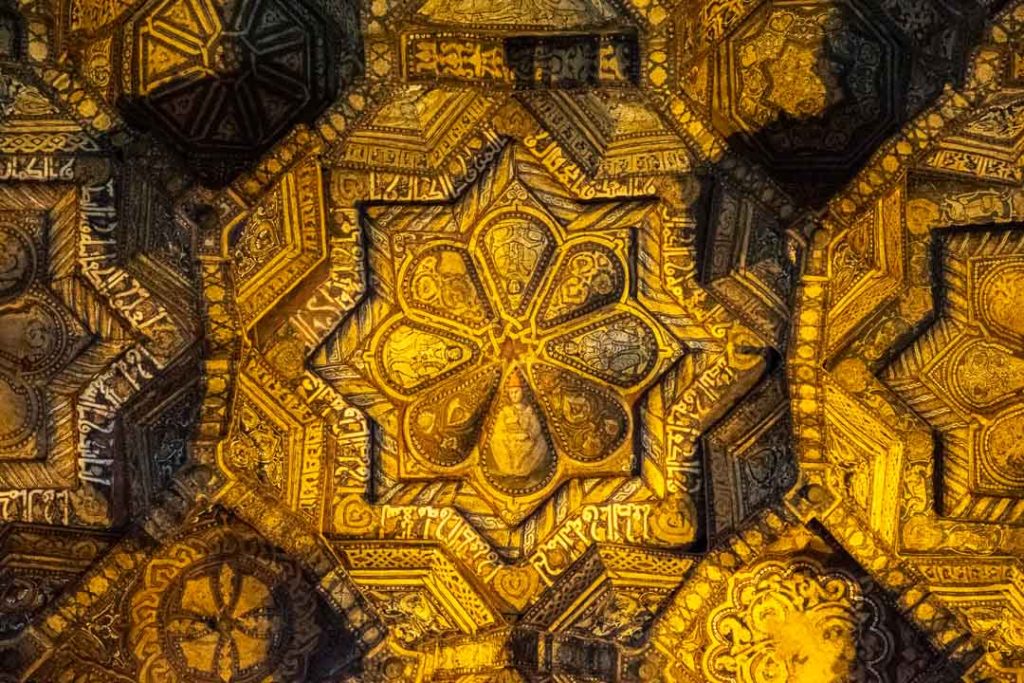 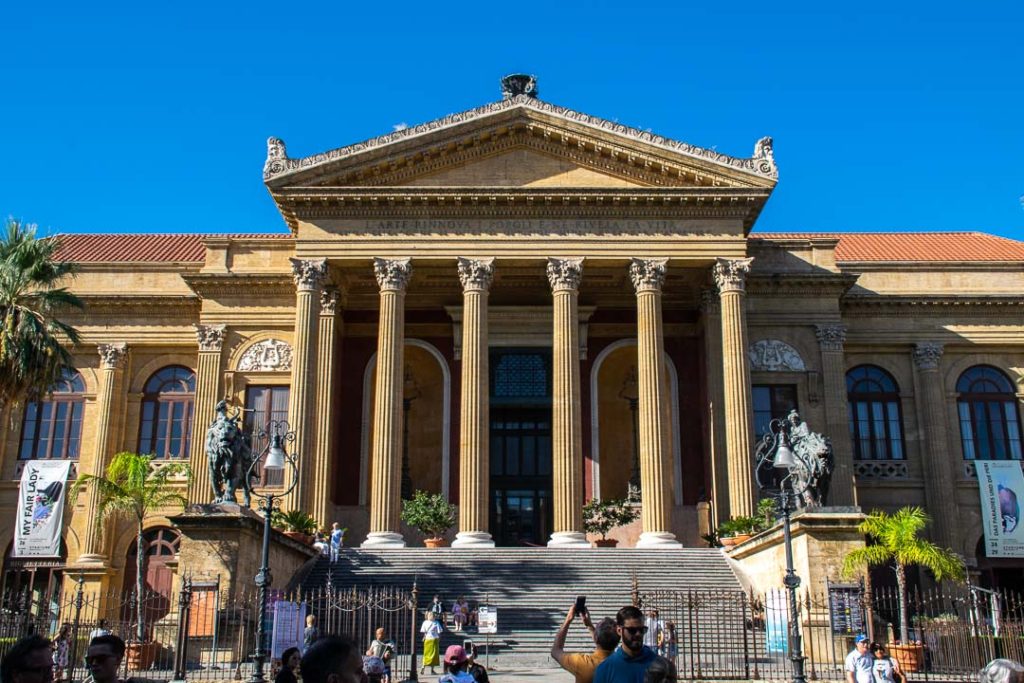 Having vastly underestimated how much the city has to offer with my 2 days in Palermo, I can’t comprehensively tell you what to see in Palermo. The few attractions I’ve mentioned so far should be a good start point at least for an itinerary. Because after them you have the countless other cultural landmarks spread through the old town and beyond.

Naturally there’s the countless churches for you to check out, it being an Italian city after all. You should find the duo of the Church of St. Mary of the Admiral and Church of San Cataldo next door quite interesting. There you’ll get more Norman influence and impressive mosaics, which will probably do you for Palermo churches. I know I certainly didn’t feel like seeing any more once I finished there. 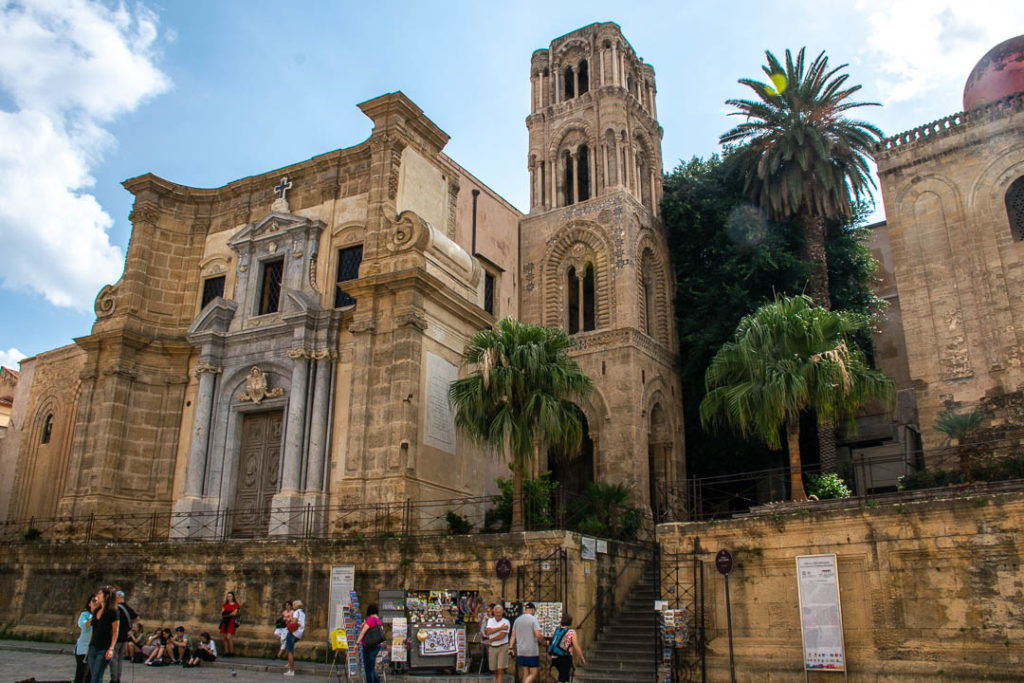 Another common sight on the culture front is Palermo’s monumental theatres. The Massimo Theatre is hard to miss with its grand exterior, not to mention the fact that it’s the largest opera house in all of Italy. A short walk away you’ll also find the Politeama Theatre with its strange arch entrance.

Of course, culture takes on many forms beyond religion and music. You should have no problem exploring the city’s food scene, but you can see a different side to it at the Vucciria market. It has a nice old-fashioned feel to it in the narrow city backstreets. 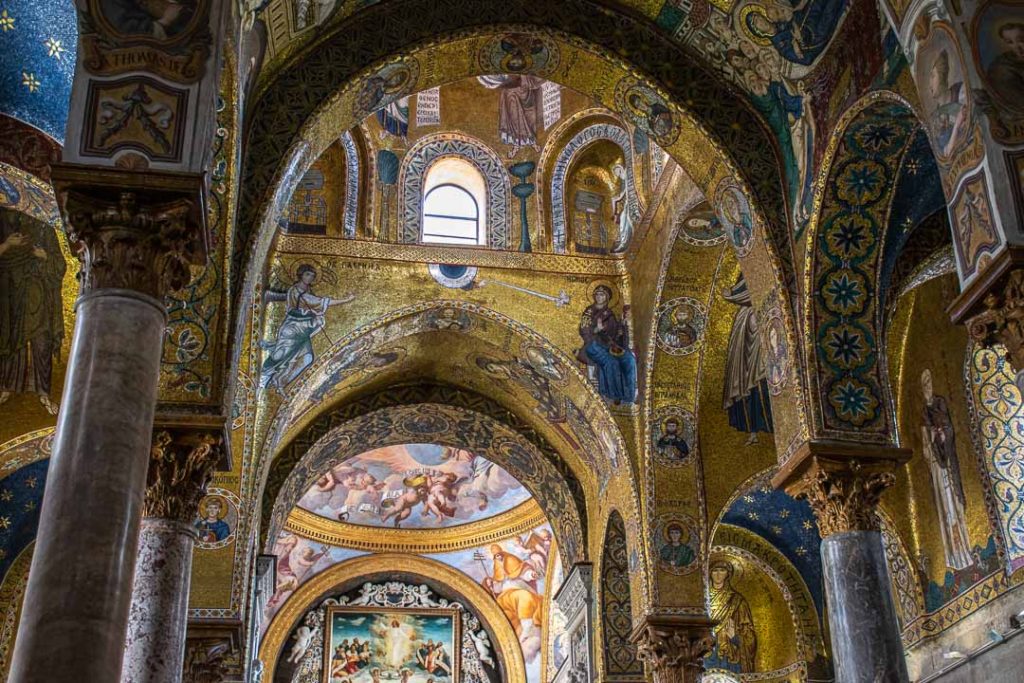 Given that it’s the biggest city in Sicily, you shouldn’t need too much help getting there. Palermo has an international airport and easy bus connections from just outside the Politeama Theatre. If you’re already in Sicily though, you can travel by train or by bus to most other major destinations.

The other thing to think about for your Palermo visit is where you’d like to stay. You certainly won’t be stuck for options as there are plenty of hotels, hostels and guest accommodation in Palermo. For a budget recommendation consider YooRoom, a small and simple guesthouse in a great location near the Massimo Theatre.

Does this Palermo blog post match with what you’ve heard about visiting the city? Have you had the chance to visit Palermo yourself? Please share your thoughts in the comments below.

7 Things to Know Before Visiting Sicily in...

Is There Anything to See in Piazza Armerina,...

5 Tips to Make the Most of Visiting...

We’re the opposite – Palermo was the first place in Sicily that we wanted to visit. That architecture is just stunning! All of the history and culture, though, are what really got us interested. Would love to spend some “quality time” getting to know the whole region, though. Like always – so much to take in, so little time to do it.