Popular Posts
5 Revealing Reasons to Visit Pristina, Kosovo
13 Things to Know Before Visiting Taiwan
How To Make the Most of a Day...
5 Tips to Make the Most of Visiting...
Free Sights to See When Visiting Valencia, Spain
How to Go Hiking in Bohemian Switzerland, Czechia
Paying a Quick Visit to the City of...
All the Things to See and Do in...
Visiting the Gothic Masterpiece of Corvin Castle, Romania
A Wanderer’s Sightseeing Guide to Valletta, Malta
Home Austria Places to Visit on the Danube River in Austria

Places to Visit on the Danube River in Austria 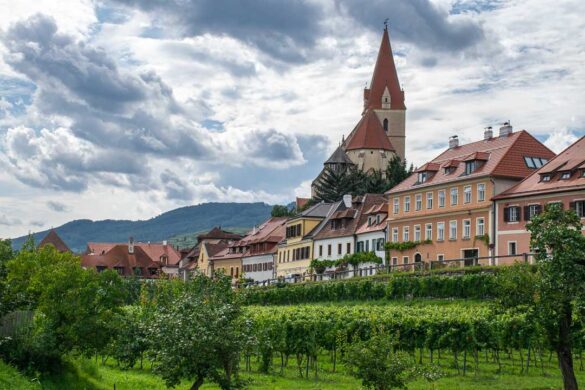 When others think of Austria, the Alps are probably the first thing that come to mind. But that’s only one side to Austria and it’s not the one I’m most familiar with. See, while much of the country is defined by its mountains, the north of Austria revolves around the Danube River. Austria isn’t the only country in Europe touched by this river, but it’s the one I always associate the Danube with. And that’s mainly because of the sheer number of worthwhile places to visit on the Danube there are in Austria.

Cruising on the Danube River is how many international tourists get to experience this gorgeous region. Not me though, unfortunately. For me it’s mostly been day trip drives while visiting Vienna to see family. My most recent visit though came between lockdowns, when desperate to get out of the city we decided on an overnight road trip along the Danube River. Rather than revisit popular Vienna weekend places on the city’s outskirts, we ventured to a string of smaller destinations along the river that prove how special this part of the country is. 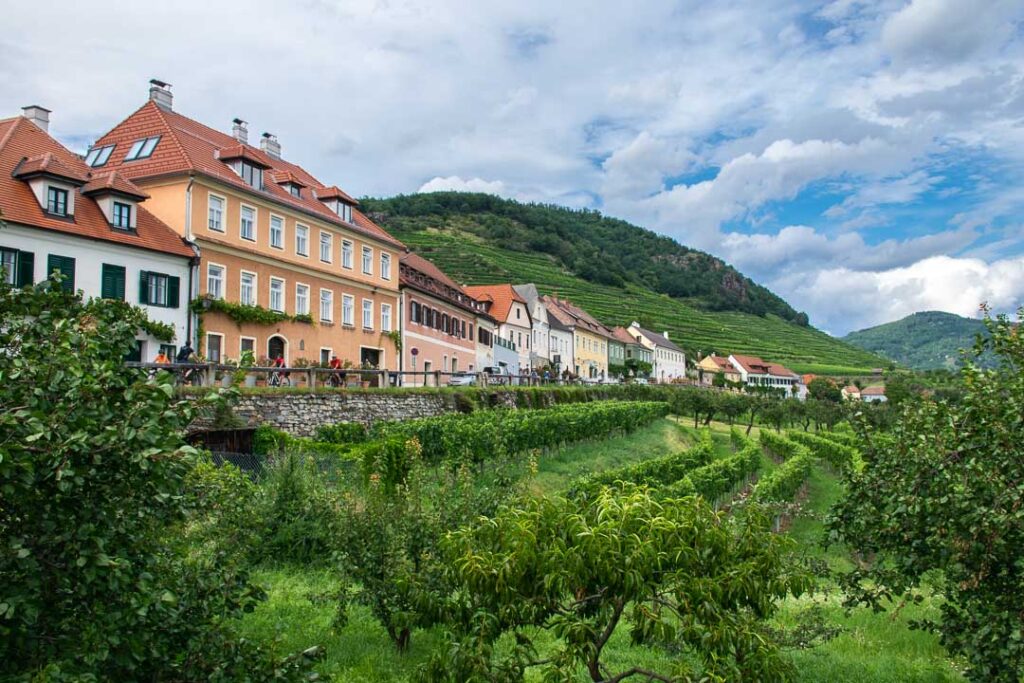 By far the most well-known part of the Danube River in Austria is the Wachau Valley. This gorgeous stretch of the river is not far from Vienna and features some of the river’s most iconic attractions.

The Wachau is the section of the river between the towns of Melk and Krems, both of which are enticing destinations for people to visit. But there’s so much more to the valley than the town’s that bookend it. Dürnstein is a charming town in the Wachau, famous for its castle and connection to Richard the Lionheart. On the opposite bank lies the ruins of Aggstein Castle, one of the most epic castles on the Danube.

But these weren’t our stops this trip, having seen all of these places at least once over the past few years. Instead, we opted for two other small villages in the Wachau region that we’d only even driven past. 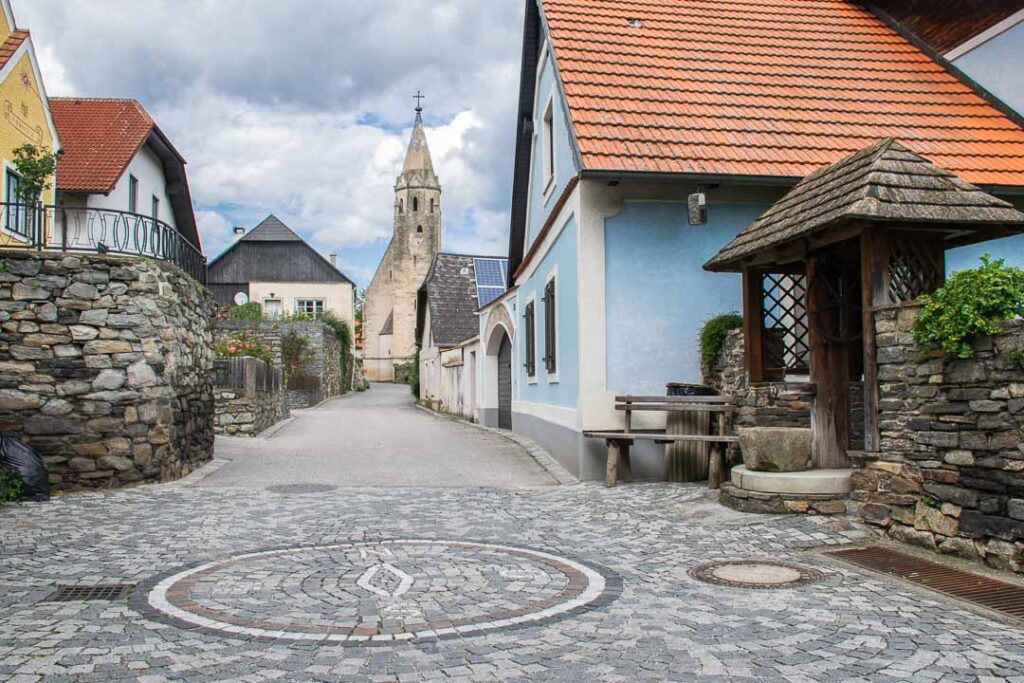 One was Weißenkirchen in der Wachau, a place we’d often thanks to its dominant church. But beyond its emblematic church, Weißenkirchen also features some quaint narrow streets and vineyards that are pleasing to look at. The other was Schwallenbach, a village that is somehow even smaller and essentially consists of a church and several heurige (wine taverns). 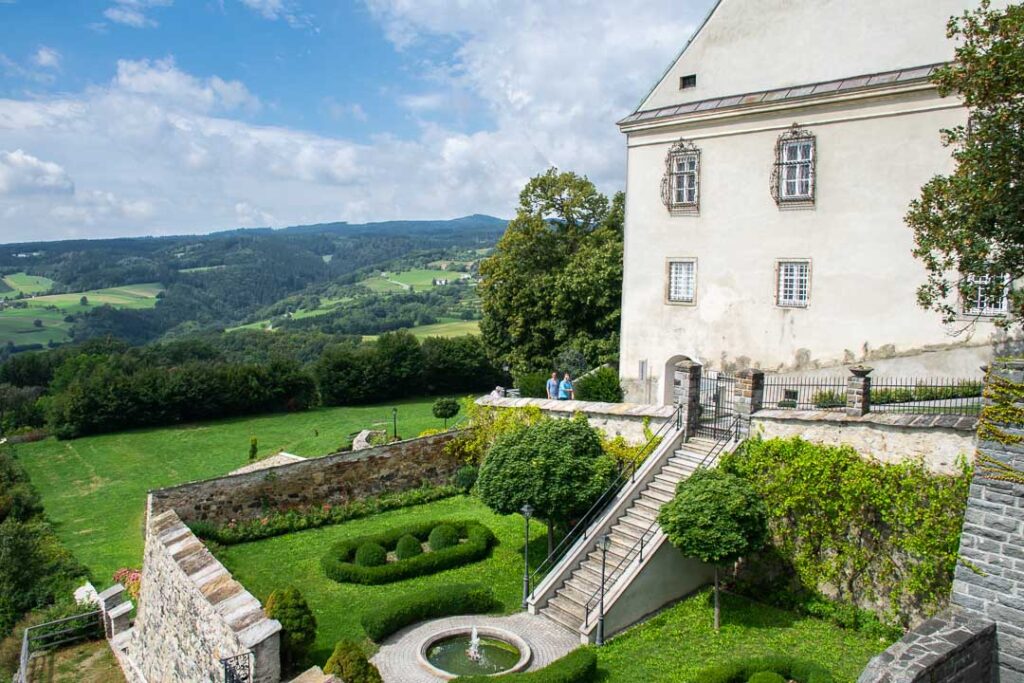 Outside of the esteemed Wachau Valley, one of the most famous towns on the Danube is Maria Taferl. That’s because this hilltop town overlooking the river hosts one of the most important holy sites in Lower Austria. Visitors from all over come to worship at its pilgrimage church, but it’s also adored by Austrians seeking a pleasant outing on weekends.

While the church will appeal to some visitors, everyone is sure to appreciate the views you get at Maria Taferl. Directly outside the church there is a big terrace with panoramic views of the Danube. 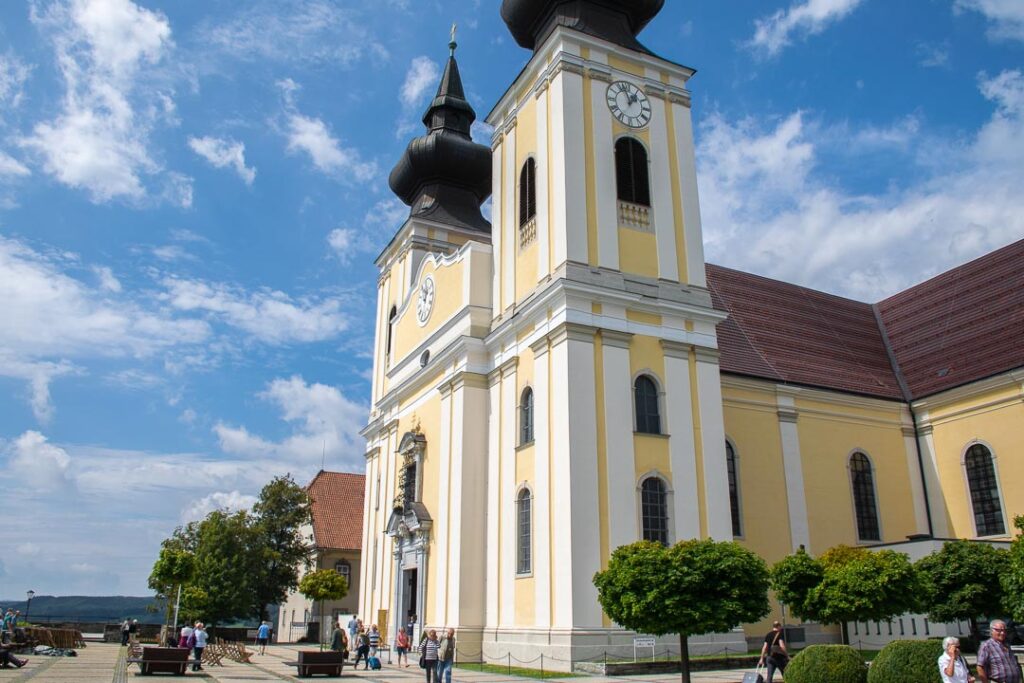 Unlike the viewpoints of the Wachau Valley, you can see well beyond the immediate valley here to the countryside beyond. Maria Taferl is laden with restaurants and cafes for visitors and pilgrims, but competition is still fierce to get a table come Sunday. 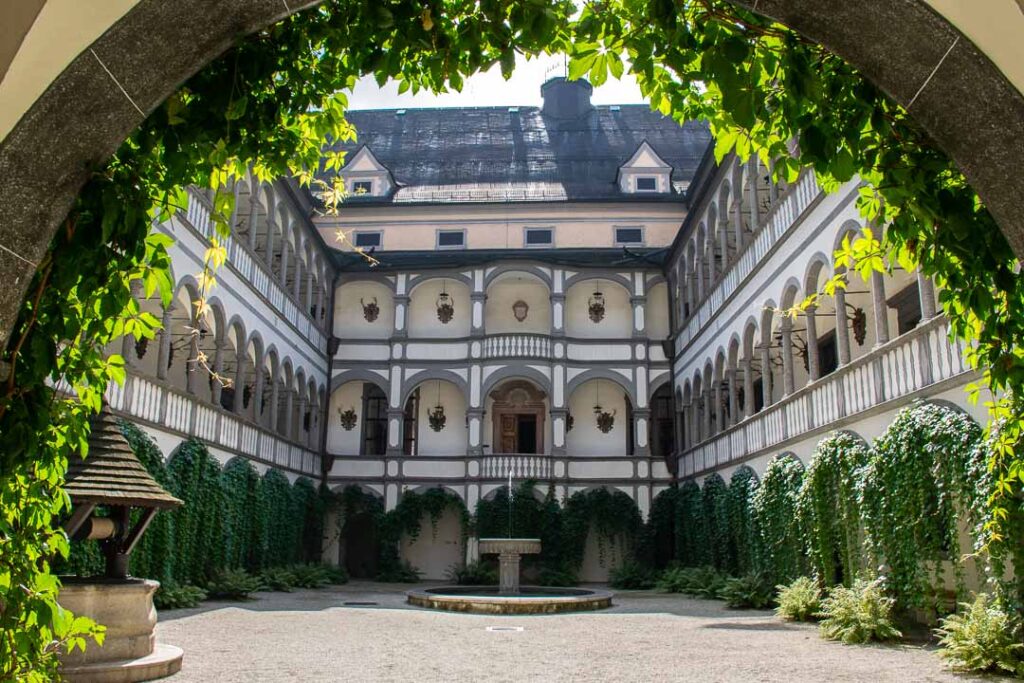 One of the most memorable destinations we came across on the Danube was the unassuming town of Grein. Found midway between Melk and Linz, Grein is a convenient stopping point for coffee and food. But once you get into the heart of Grein you soon realise that it’s quite a colourful and pretty town to explore.

The one aspect of Grein that’s hard to miss is the town’s signature landmark, Schloss Greinburg. Resting on a small hill near the heart of town, the castle and its formidable size is sure to draw interest from passers-by. What’s interesting is that the castle’s exterior doesn’t really reflect what you find inside. 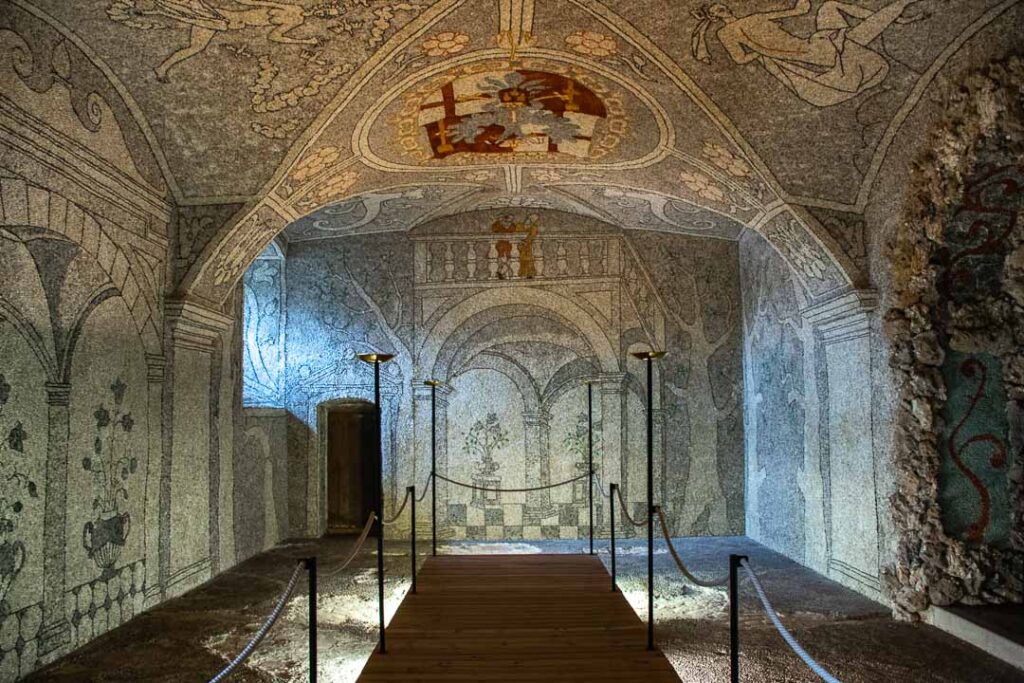 Stepping foot into its impressive central courtyard draped in ivy is a wonderful surprise. Things only get more curious once you visit its underground chapel covered in a mosaic of pebbles. It’s one of those rare sights where you know you’ve never seen anything like it. 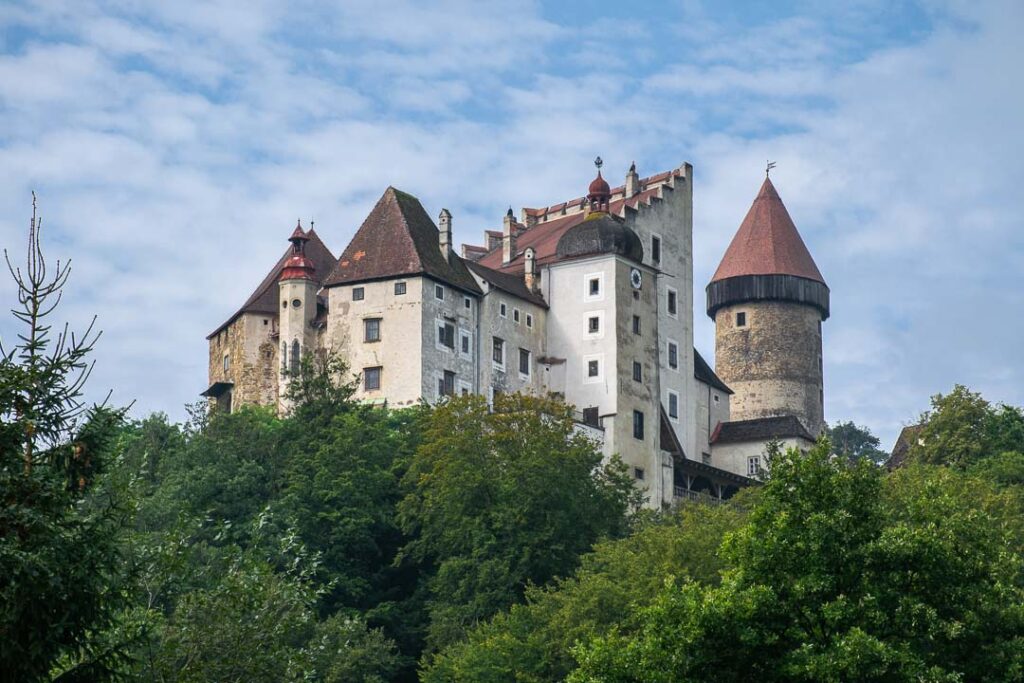 From one castle to another, we journey away from the river to the unconventional form of Burg Clam. This picturesque castle can be found poking through the forest canopy in the hills north of the Danube. Every angle of Burg Clam makes it seem like a different castle, so don’t let your first impression throw you. It’s the kind of castle that has clearly evolved dozens of times over the centuries, with each addition having its own style and shape.

The castle was unfortunately closed the day we went but it still impressed me even from the outside. However, it is normally possible to take a tour of the castle on weekends. 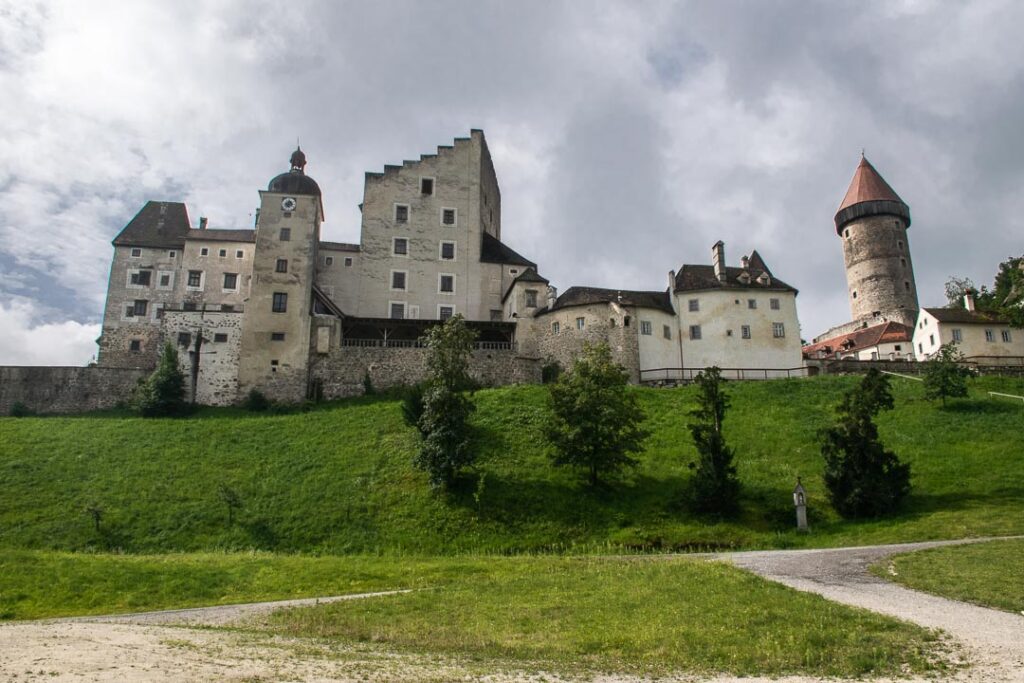 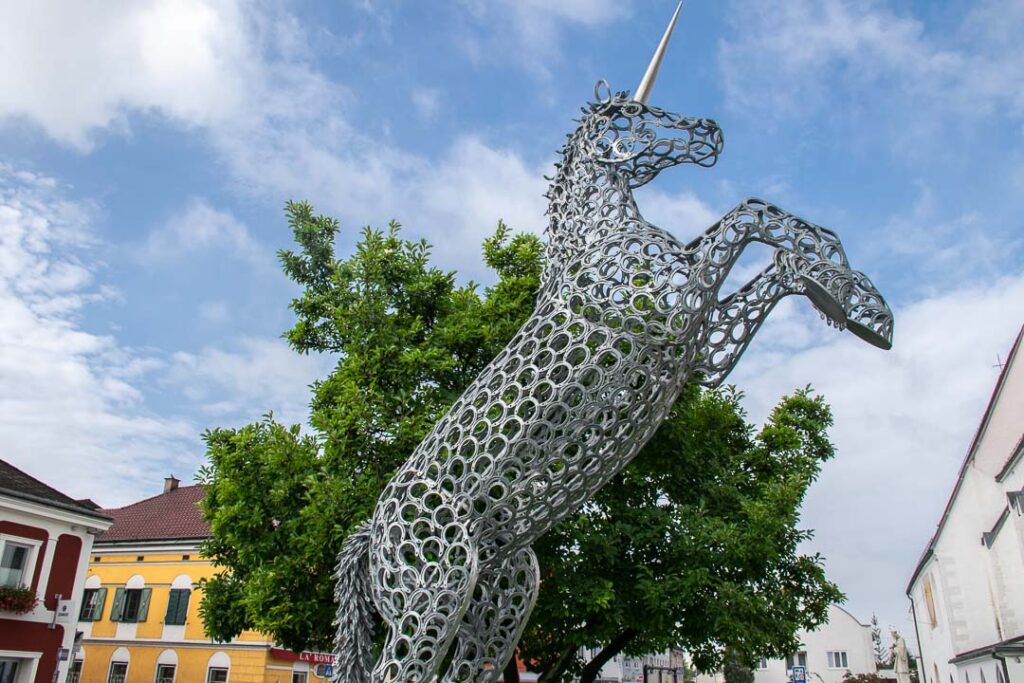 Were it not for one or two things about it, the small city Perg probably wouldn’t make this list. Perg is the main municipality for this region along the Rhine and seemed mostly agricultural and industrial. However, the city does have a fixation on unicorns, which does seem noteworthy.

Enter the main square of Perg and you’ll find a large unicorn statue made of metal horseshoes. The inspiration for this odd landmark is the unicorn on the city’s coat of arms, which you can see painted on the nearby church tower. Certainly seems worth a brief stop, no? 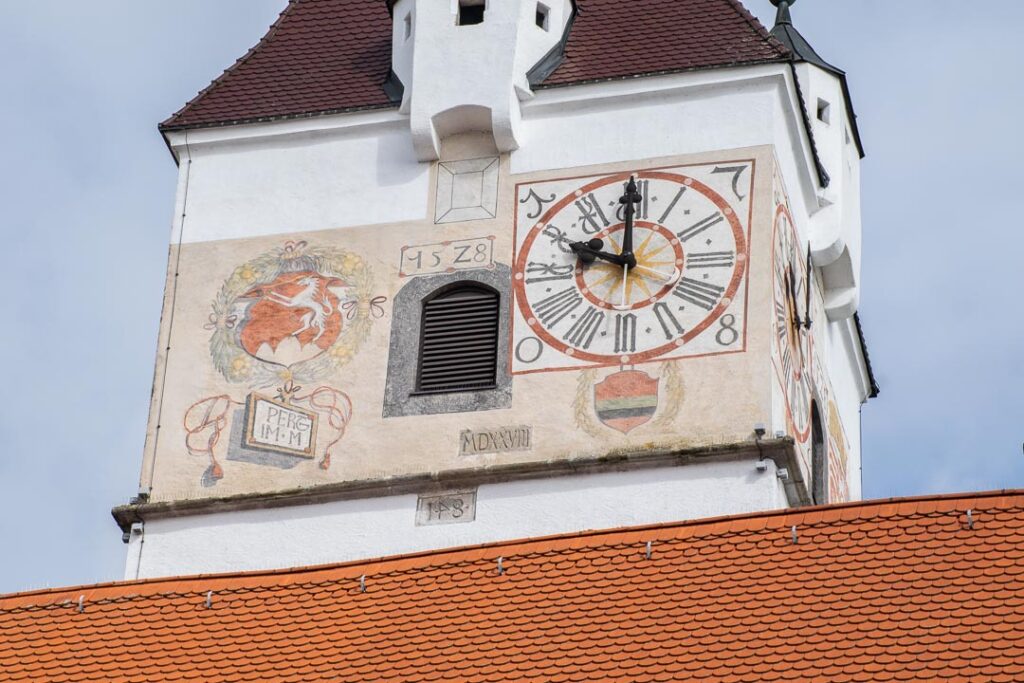 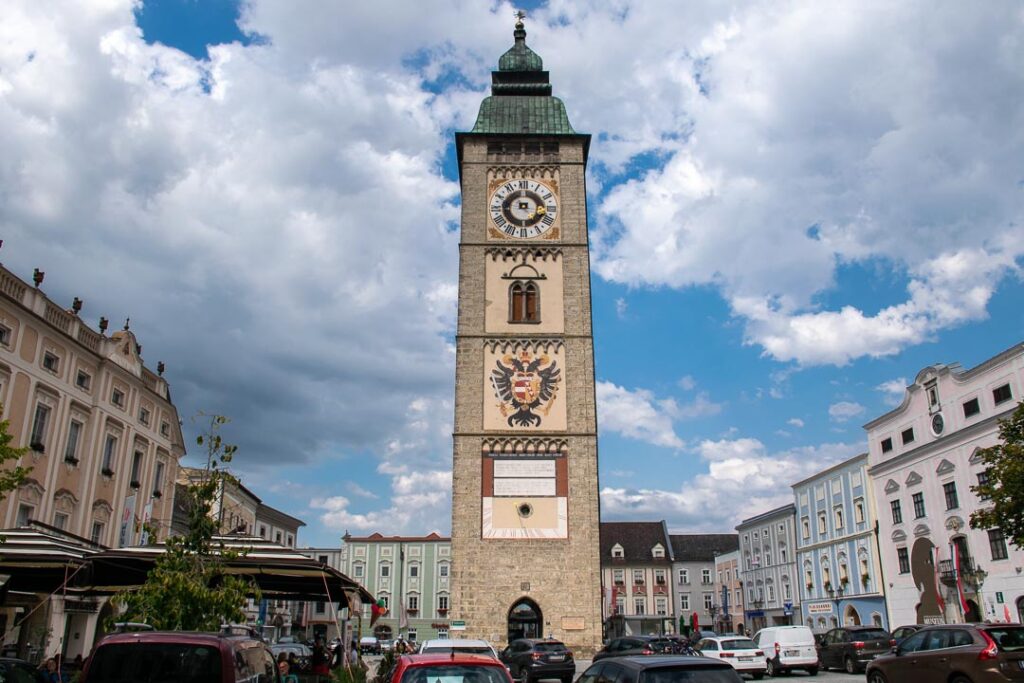 If there’s one place where I definitely feel like I could have spent longer it was the town of Enns. It was our furthest point on the road trip before turning back to Vienna and a place I’m curious to see more of. That’s because Enns is loaded with history. Enns was once a sizeable Roman camp and I’d like to visit the Museum Lauriacum there to learn more about it next time.

Not that I missed every major attraction in Enns. After all, who could miss the massive clock tower right in the centre of town. This bell tower dates from the 16th century and is a cherished local landmark and viewpoint. Enns also features a castle of its own, although it seems exclusively a wedding venue nowadays. 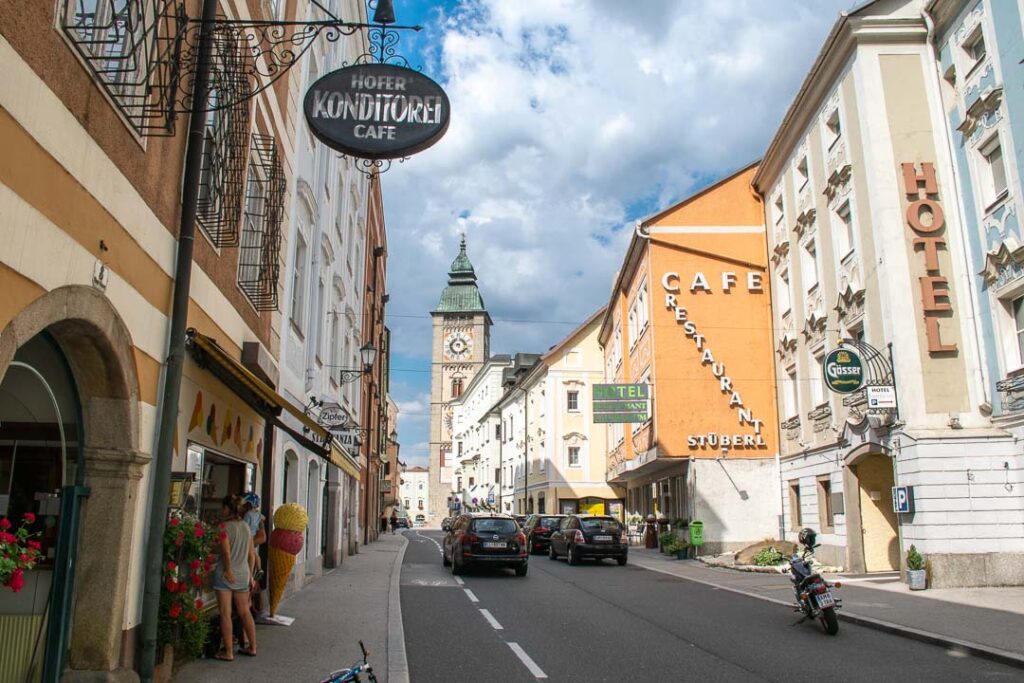 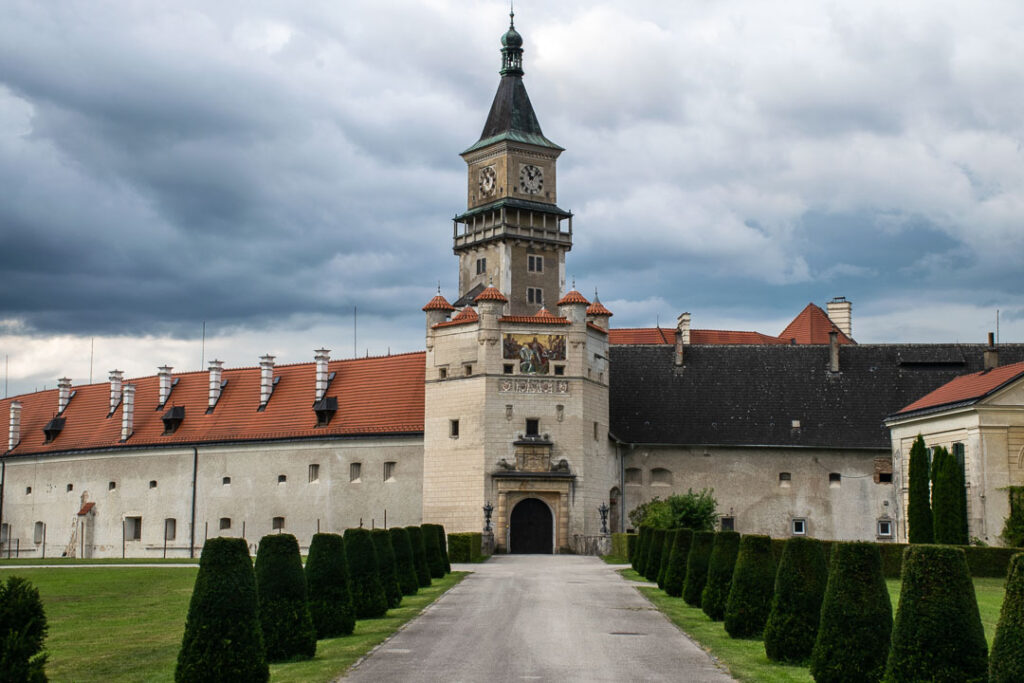 One final small town on the Danube in Austria that I want to mention is Wallsee. It was only because of our accommodation that we saw this small town on the river’s south bank. But Wallsee proved to be a nice place to spend the night, with nice views of the river and a few notable landmarks.

It only really took a quick wander around town to get a sense of Wallsee. It’s most significant feature is Schloss Wallsee, a large castle that also serves as a wedding venue. Other than that, there’s a small Roman museum and the pleasant waterfront by its small lagoon to be seen.

Tips for Visiting the Danube in Austria 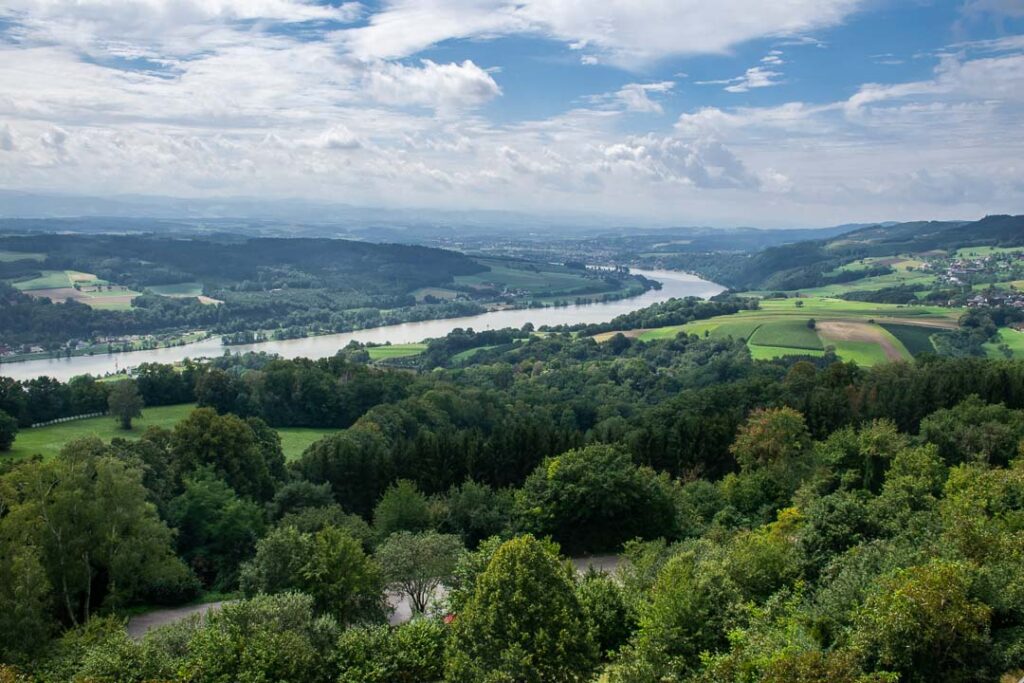 That should at least give you a starting point of where to go as you follow the Danube River through Austria. But there are other things to consider besides the where, like the when and how.

Visits to the Danube are most common during summer because of the busy cruise schedule and fine weather. However, I will say that the region is also exceptionally pretty in spring and autumn.

As for getting to these places, it’s worth mentioning that some are hard to reach without your own car. If you’re cruising, it will definitely depend on where you stop of course too. You’re practically guaranteed to stop at the Wachau Valley, but places like Grein and Maria Taferl I’m not so sure. Public transport also isn’t going to be great, so renting a car is the safest option.

Finally, a word on accommodation. You’re going to be overwhelmed with choice when it comes to places to stay. You could spend the night in almost any of these towns or cities without issue. My recommendations though are Wallsee because the Gasthaus Pension Wallseerhof was excellent, as well as either Melk or Dürnstein in the Wachau Valley.

Have you gone for a road trip or a cruise on the Danube River? What other destinations in Austria along the river would you recommend to people? Please share your thoughts in the comments below.

A Quick Look at Things to Do in...

The Many Rewards of Hiking Schafberg in Austria

Best Weekend Spots for Locals on the Vienna...