Popular Posts
A Wanderer’s Sightseeing Guide to Valletta, Malta
The Treasured Sights of North West Tasmania, Australia
Why Mellieha is the Home of Hiking in...
9 Best Things to Do in Syracuse, Sicily
9 Things to Know Before Visiting Bulgaria
Best Places to Visit in the Mountains of...
Estonia’s Best Kept Secret, the Island of Saaremaa
What to See When You Visit Celje, Slovenia
7 Things to Know Before Visiting Sicily in...
5 Revealing Reasons to Visit Pristina, Kosovo
Home Austria A Quick Look at Things to Do in Steyr, Austria

A Quick Look at Things to Do in Steyr, Austria 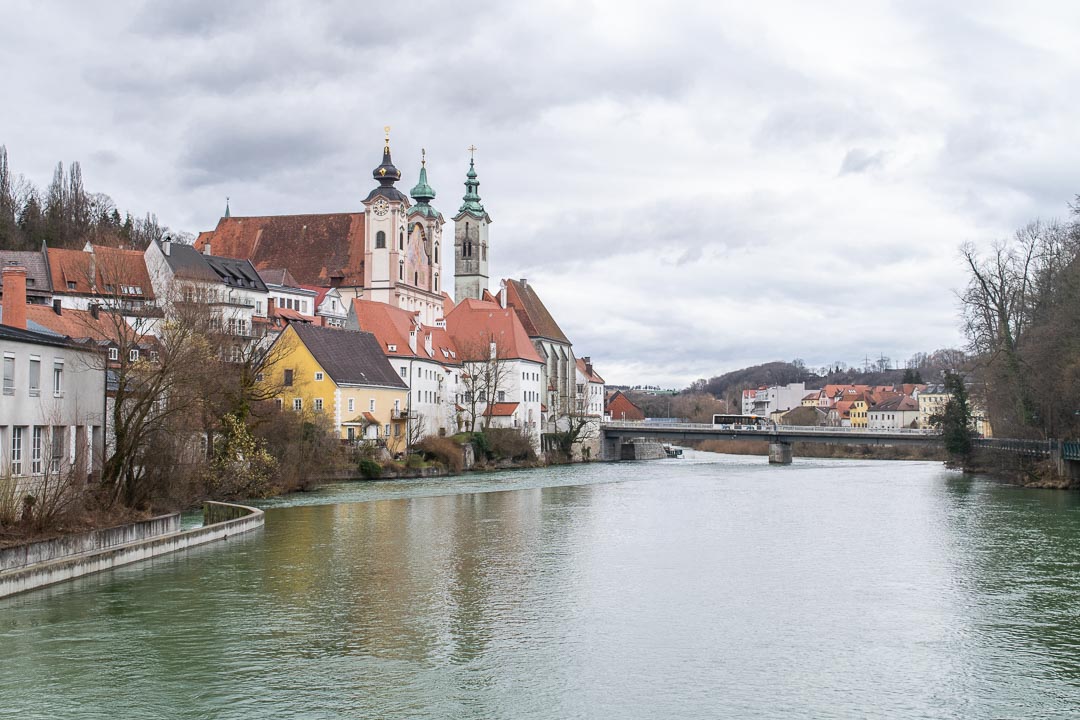 For how much time I’ve spent in Austria over the years, it often feels like I haven’t seen much of the country beyond Vienna. Not that there haven’t been places I’ve wanted to see. The small city of Steyr in Upper Austria was one such place that been lurking in the back of my mind for a while. And all it took to get me to notice were a few photos that I saw years before finally visiting.

When I did finally visit Steyr, I was really quite pleased to see it live up to what I had seen. I’m sure that it’s even prettier at other times of year, but even in winter it impressed me with its scenery. With a day trip there, I feel like I saw most, but not all, of the city’s sights. So if you’re looking for some idea for things to do in Steyr, allow me to fill you in on this understated Austrian destination.

The defining characteristic of Steyr is the way the city sits at the meeting of two major Austrian rivers. Close to the city centre you’ll find the confluence of the Steyr and Enns rivers. They may not be as iconic as the Danube, but they’re both major rivers that flow down from the nearby mountains.

With two rivers carving their way through it, Steyr has plenty of waterfront views to admire. There are also many differnet bridges around the city, meaning you have endless viewpoints to choose from.

Walk Around the Steyr Stadtplatz

That the Old Town area of Steyr isn’t huge is only amplified by the size of its main square, the Stadtplatz. It really feels like so much of the city’s historic area is taken up by this large square that there’s not much room for anything else. As such visiting the square is definitely an essential thing to do in Steyr.

Like any good town square, this is where you’ll find many of the most interesting buildings around town. And Steyr really doesn’t disappoint on that front. The long square is lined with a real mix of historical buildings, from some that are plainer to ones that immediately stand out. One that naturally stands out thanks to its clocktower and Rococo design is the Town Hall, but there are others as well like the Bummerlhaus and one of the local banks.

But I think my favourite landmark though is the Sternhaus, because its design really is unique. As you can see above, it’s not an ordinary building, with its blue and yellow aestthetic and incredible details.

Sometimes it’s brief moments when you’re exploring a place that help make it an experience. One such place for me from Steyr in Austria was a minor passage off the main street. This cute little passage passes through a local antique clockmaker and jeweller. There’s even a small clock museum as well, but it was all shut the day I was there. What was great was that the passage was still open and it felt like a pocket of the city trapped in time.

Although there are a handful of churches around Steyr, the one that most caught my eye was the Stadtpfarrkirche. This large gothic church is just up a hill from the main square and can be reached by a covered stairway called the Pfarrstiege. These covered staircases always increase my interest in a church, but there’s more to the Stadtpfarrkirche than just how you get there.

Around the church’s entrance you’ll find a really interesting collection of ornate tomb stones and even what looks like a painting from the early period. Over on one side of the church there’s also a war memorial for locals who died during WWI. All these different elements make visiting the church more than just a regular church visit.

When I think back to visiting Steyr, the attraction that always comes first to mind is the Blumauerhaus. The house sits at the northern end of Enge Gasse near the riverfront and connects to a gate leading up to the local castle.

But what’s so memorable about this house is that it bears a huge mural that extends across to the attached gate.  Given how crisp the mural is, it has no doubt been retouched, but that really doesn’t matter. I really like how you can admire this mural and at the same time also look right down the pedestrian street with its wrought iron signs. There’s something quintessentially Austrian about that spot, which make me think everyone visiting Austria should see it.

Sitting up on a hill over the historical centre of Steyr is Lamberg Castle. From a distance it may not look much as two sides of its exterior are rather plain. But come through the main gate to its courtyard and you’ll see why this castle is worth visiting, even if I don’t think you can go inside.

Although the architecture here is grand like you’d find at any Austrian castle, that’s not what makes it interesting. No, it’s the statues in the garden of the courtyard that make the castle so fun to visit. There are a few more classic statues about, but the majority are quirky gnomes that give the castle a slightly less serious feel. And of course there’s the central fountain, which features a statue of the dog at its centre.

Now that I’ve shown you the sights of Steyr, I thought I’d pass along a few tips as well. The big one is to remember that Steyr is not huge, so plan accordingly. Not that you can’t spend longer here, as there are places to stay in Steyr. It just very much feels like a day trip destination, that’s all.

But that kind of works with Steyr’s location, as it makes for an excellent stop between Salzburg and Vienna. If you’re doing a road trip it only requires a small detour off the motorway between the two which is great. Getting there by train is a little slower, as you need to change at St. Valentin.

My experience in the city may have been influenced by a few factors worth mentioning. From the photos you can tell I was there in winter, which often isn’t the most photogenic time of year if there’s no snow. The other is that I was there on a Sunday, which in Catholic Austria means places are generally closed.

Have you heard of the city of Steyr before? Which of the things to do here most intrigues you and makes you want to visit? Please share your thoughts in the comments below.

The Many Rewards of Hiking Schafberg in Austria

Best Weekend Spots for Locals on the Vienna...

7 Things to Know About Drinking Coffee in...

What a charming town! We love finding and exploring the towns between larger destinations. They are always so charming, with their own attractions and histories. Steyr seems much the same – definitely someplace we’d detour from the main motorway for!