Popular Posts
How To Make the Most of a Day...
5 Revealing Reasons to Visit Pristina, Kosovo
Where to Stay in Tallinn on Your First...
Tourist Attractions in Hobart You Shouldn’t Miss
Interesting Things to Do in Albany in Western...
11 Things to Do in the Three Cities,...
The Treasured Sights of North West Tasmania, Australia
Stella Artois Brewery Tour in Leuven, Belgium
A Day in Cradle Mountain National Park, Tasmania
Visiting the Gothic Masterpiece of Corvin Castle, Romania
Home Kosovo What It’s Like Hiking Rugova Canyon and Hajla in Kosovo

What It’s Like Hiking Rugova Canyon and Hajla in Kosovo 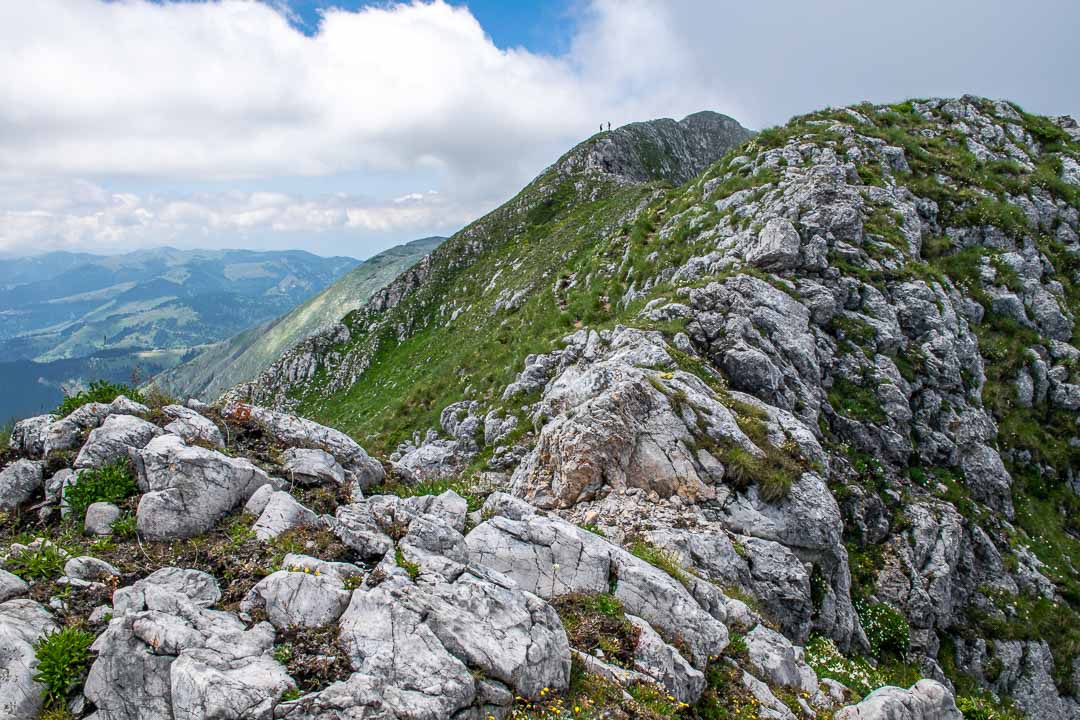 The idea that Kosovo is an awesome hiking destination takes a lot of people by surprise. It’s certainly not something I knew about prior to planning my first visit there. But with some epic mountain scenery and very few people to share it with, hiking in Kosovo really delivers. A perfect place to start is the Rugova Canyon in the northwest of Kosovo, which is exactly what we did.

Now, whenever an experience or destination really amazes me, it takes me a long time to share it. That’s not because I want to keep it to myself, but more that I want to do it justice. My time hiking Rugova Valley and the surrounding mountains was such a blast, full of good times and stunning scenery. All told, we spent three days hiking around the Accursed Mountains of Kosovo, which I was more than keen to do after hiking in Slovenia.

Rather than share it all at once, this post is solely about our time in Rugova Canyon and the hike up to the summit of Hajla, one of the higher peaks in this part of the Balkans. So, if you’re looking for a day hike while in Kosovo, here you go. 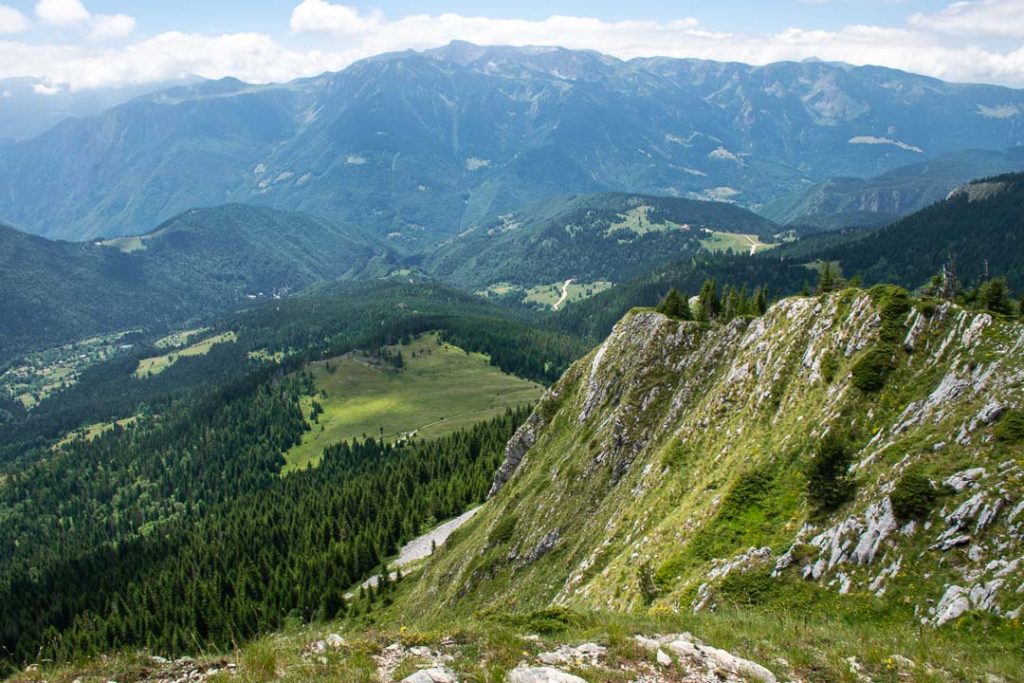 Chances are you’re not already familiar with the Rugova Canyon, so I thought I’d lead with a general introduction. Frequently also called the Rugova Valley, this river canyon extends from Peja up into the Accursed Mountains around the city. Frankly, I can’t think of a cooler sounding place to go explore, can you?

Anyway, the Accursed Mountains are part of the Dinaric Alps that run right through the Balkans, with this section stretching along Kosovo’s borders with Montenegro and Albania. Such a dramatic landscape is an obvious choice for hikers, with most visiting to walk the famous Peaks of the Balkans trail that passes through much of this region. 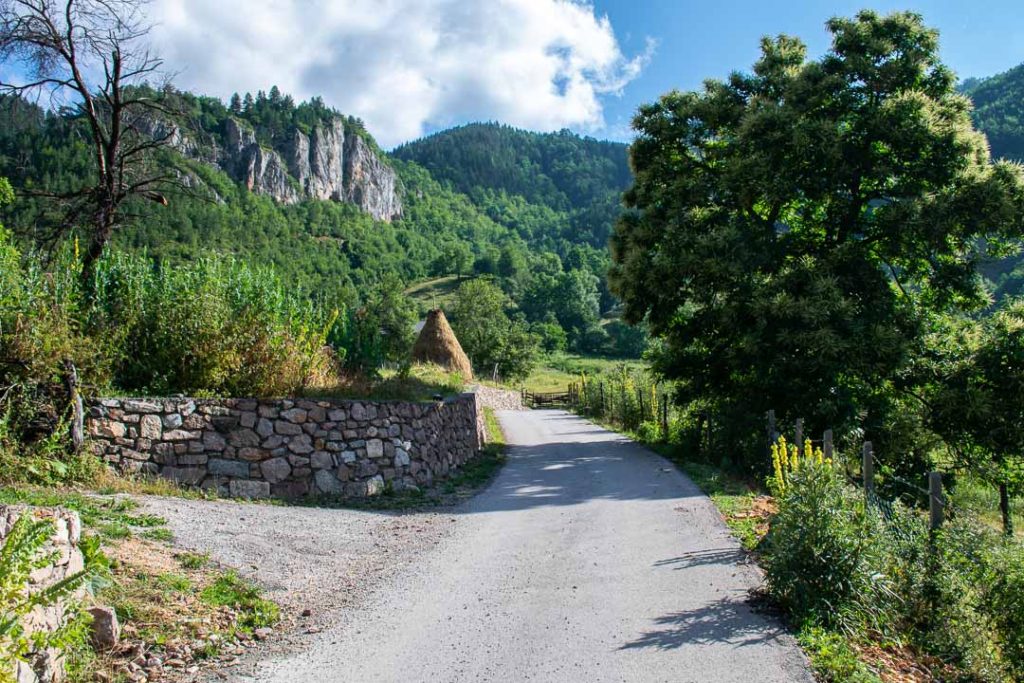 Two stages of this long trail is spent in and around the Rugova Canyon, with two more spent out in the surrounding Accursed Mountains National Park. What grabbed our attention about the Peaks of the Balkans trail here was its proximity to Hajla mountain. Reaching 2,403 metres in altitude, Hajla is the highest point along the Rugova Valley and sits on the Montenegro border.

Hardly surprising that this region is one of the best places to visit from Peja. 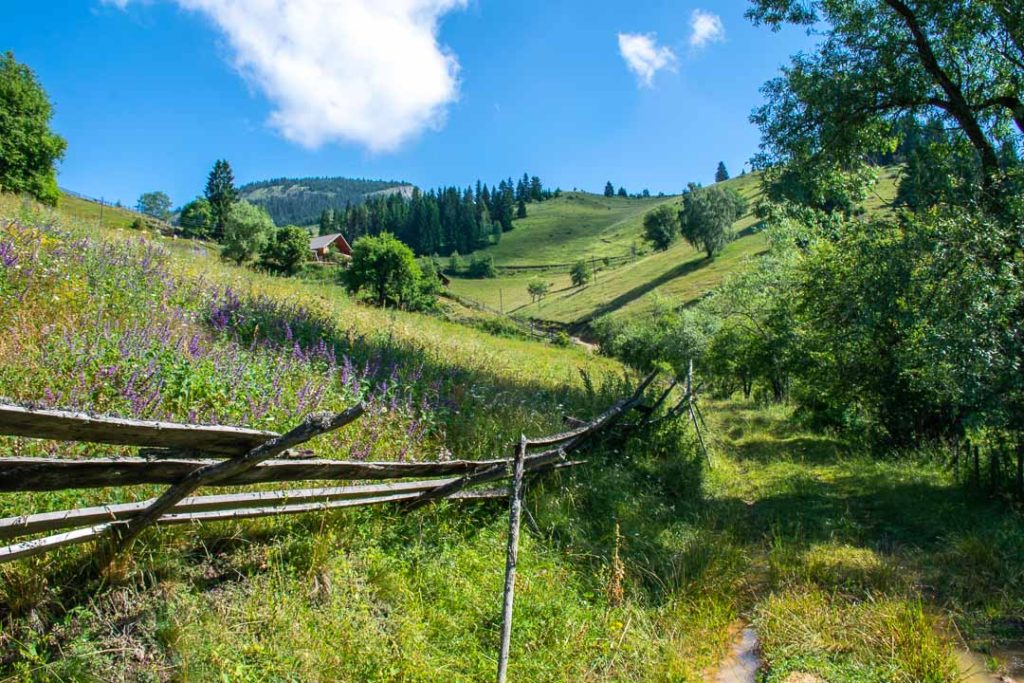 Our plan for this first day of hiking was fairly straightforward. We’d arrive in the Rugova Canyon and hike from the village of Drelaj up to the summit of Hajla and back. It’s worth mentioning that this isn’t exactly a regular route for people here.

Normally, visitors to this part of the Rugova Mountains would go in one direction from Reka e Allagёs to Drelaj along the Peaks of the Balkans route. We’d been warned in Peja that this particular stretch wasn’t too interesting and mostly on sealed roads. Hoping to get a little more adventure out of the experience, we instead opted for something different.

All told, the hike up took around 5 hours with us constantly climbing. It turns out if you stick to the Peak of the Balkans route most of the way, you can save close to an hour. Just past Pepaj there’s a crossroads, really the only one along the way. We went straight ahead, but it seems we should have taken a right turn. But I don’t think I would change a thing.

Hiking in the Rugova Mountains 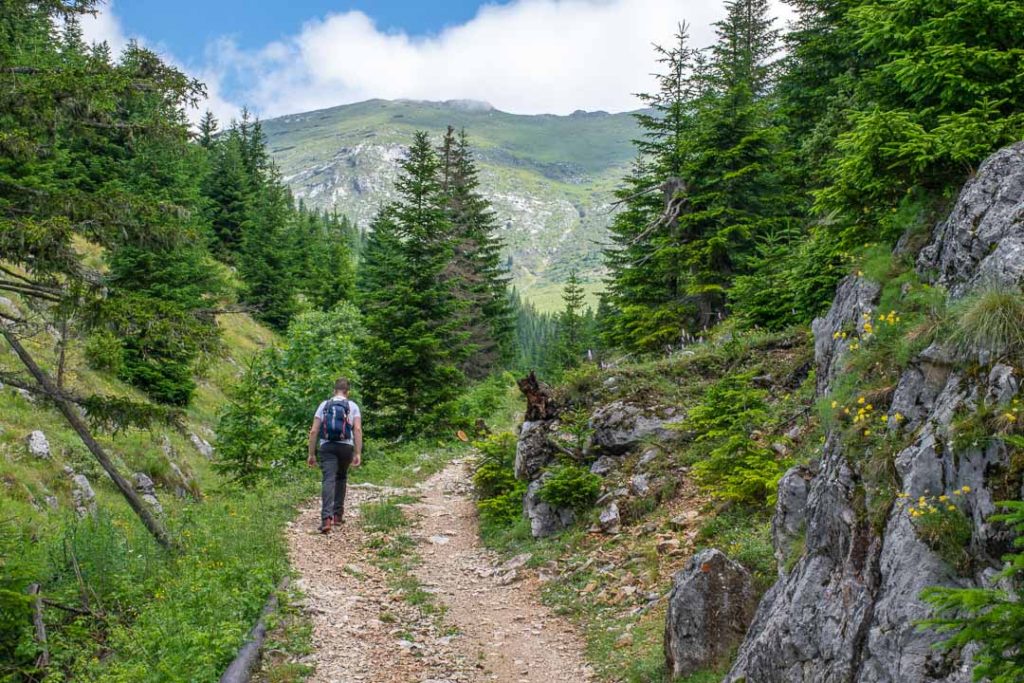 Upon arriving in Drelaj, we dumped out belongings at the guesthouse lodge and set out on the trail. Early on we were taking the marked Peaks of the Balkans route through fields and forest. Despite what we had been warned, the hike was lively from the get-go. From muddy tracks to crossing farms and squeezing past herds of cows, there weren’t many dull moments.

Our attempts at navigation also kept us on our toes. Despite a physical map and GPS apps like OsmAnd and BackCountry Navigator we had a few moments of pause. You see, this part of the world isn’t too thoroughly signposted or given much detail in maps. It also didn’t help that we were travelling against the usual direction of the trail to a custom endpoint. 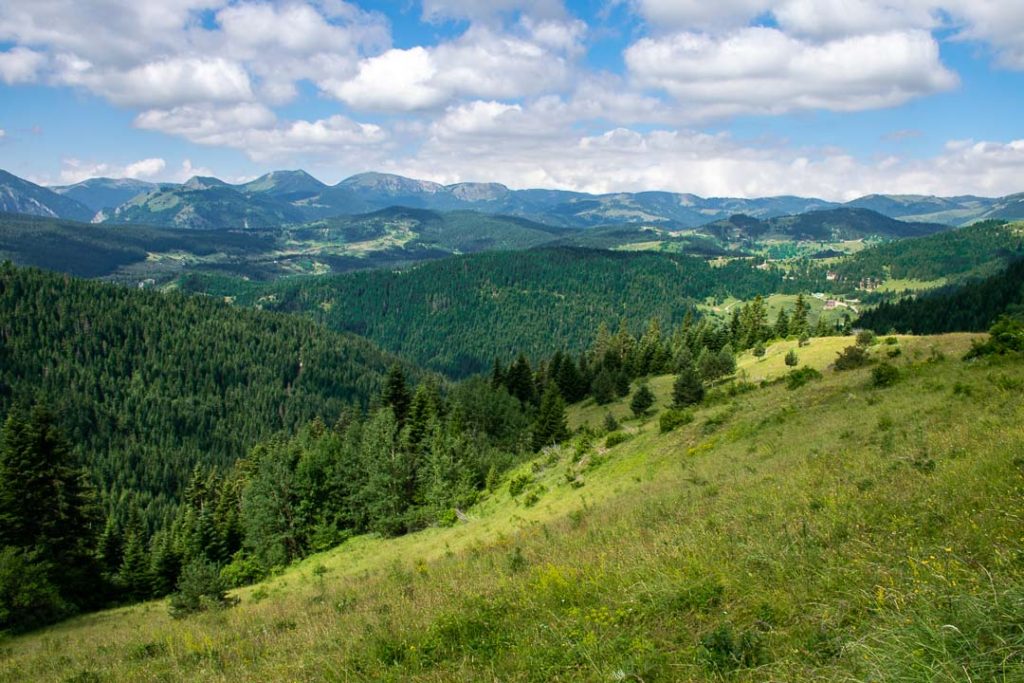 Regardless, it wasn’t long before we passed some actual houses in the small village of Pepaj. It was at this point that our surroundings shifted from mostly forest to more open pastoral areas. The high mountain fields are clearly grazing country in the summer as we just kept encountering one small cow herd after another. It was actually on this hike that I learned I have a strange distrust of cows. Every time we got near them it put me a bit on edge and I still have no idea why!

But that was all short-lived as we soon enough reached the community of wooden cabins in Vranoc at the foot of Mt Hajla. 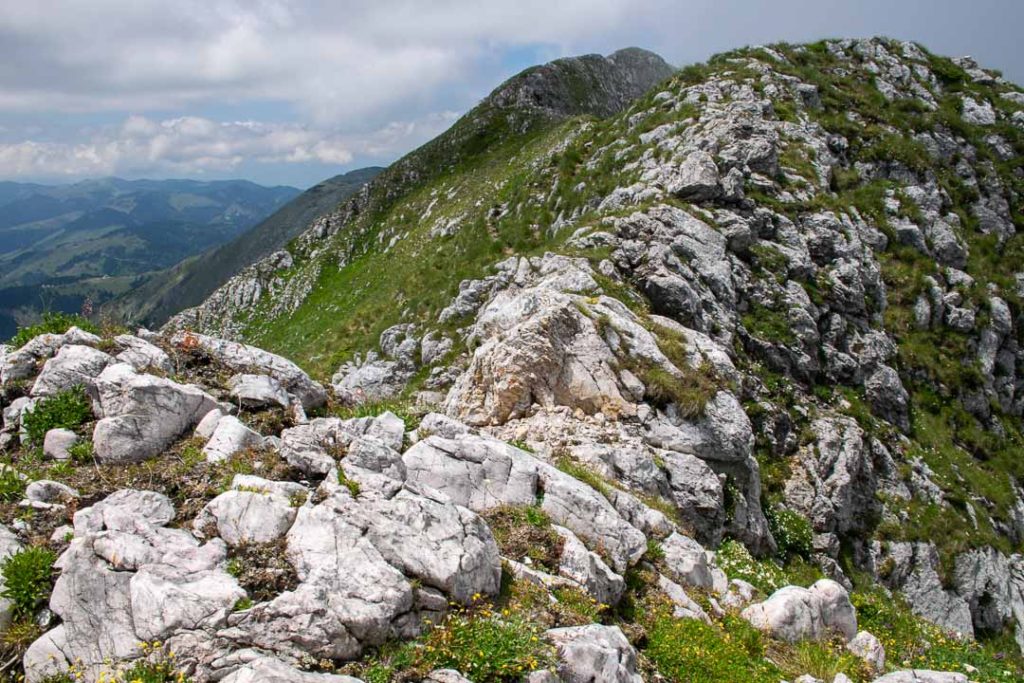 It’s interesting how your eyes perceive hills and mountains sometimes. Standing in the open fields around Vranoc and looking up at Hajla, the mountainside didn’t seem too steep. But the summit of Hajla is at 2403 metres elevation which is roughly 500 metres above the village. So that final climb was far from gentle and was actually the hardest part of the day.

Not that we made life easy for ourselves. In hindsight, we should have taken the close by trail that was easily visible from the summit. Instead, we were led astray by the sight of a group hiking up the far ridgeline of the mountain. That approach meant first crossing in front of the mountain and then taking the deceptively steep way up. Oddly enough, we never actually saw that group again, probably indicating how slow I was on this climb. 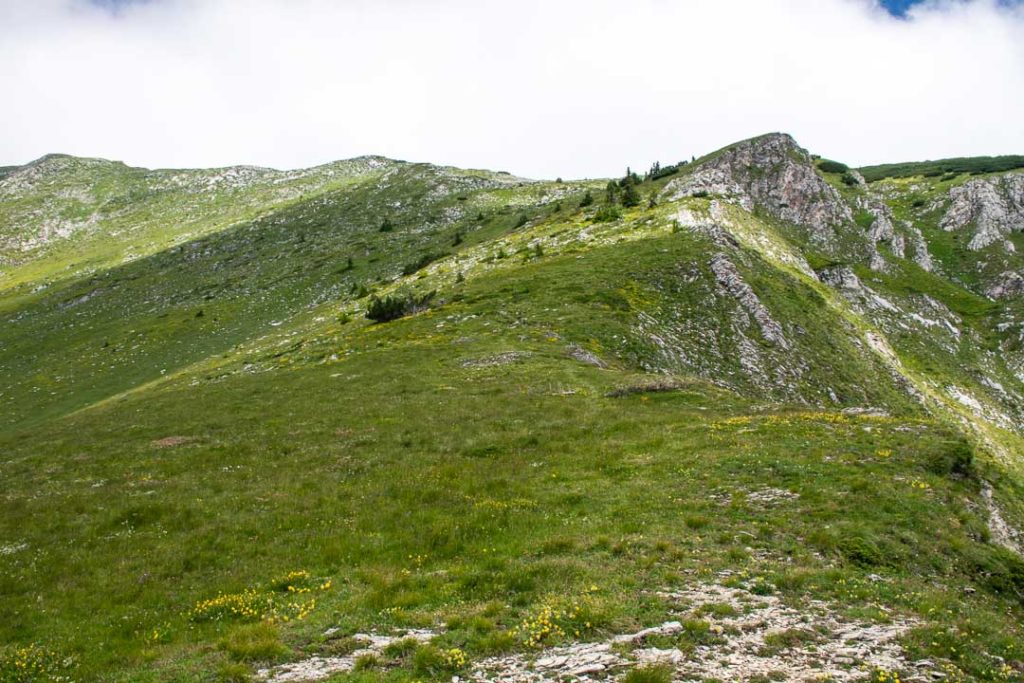 After a lot of puffing sweating, we eventually made it to the ridgeline on top of the mountain. What wasn’t obvious from below is that Hajla has a very sheer ridgeline on the far side. Following the path by the ridge, there was a very long, sudden drop down over the border into Montenegro to our right. But with memories of Triglav still fresh, it really didn’t bother me in the slightest.

Just shy of the summit we had our one and only encounter with other hikers that day. Hiking a little further we reached the summit, shown with a broken signpost and a spray-painted “2403” on a rock. Maybe not the most ceremonial of summits, but the feeling of being up there was plenty. The sublime views over Montenegro and back across the Rugova Canyon were a decent reward as well. 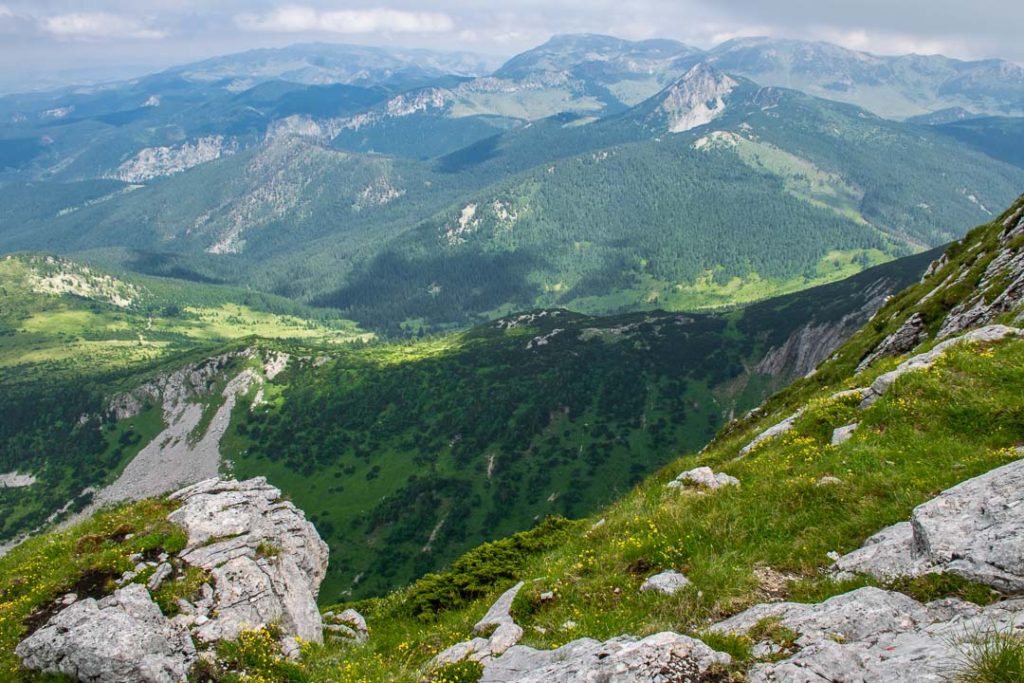 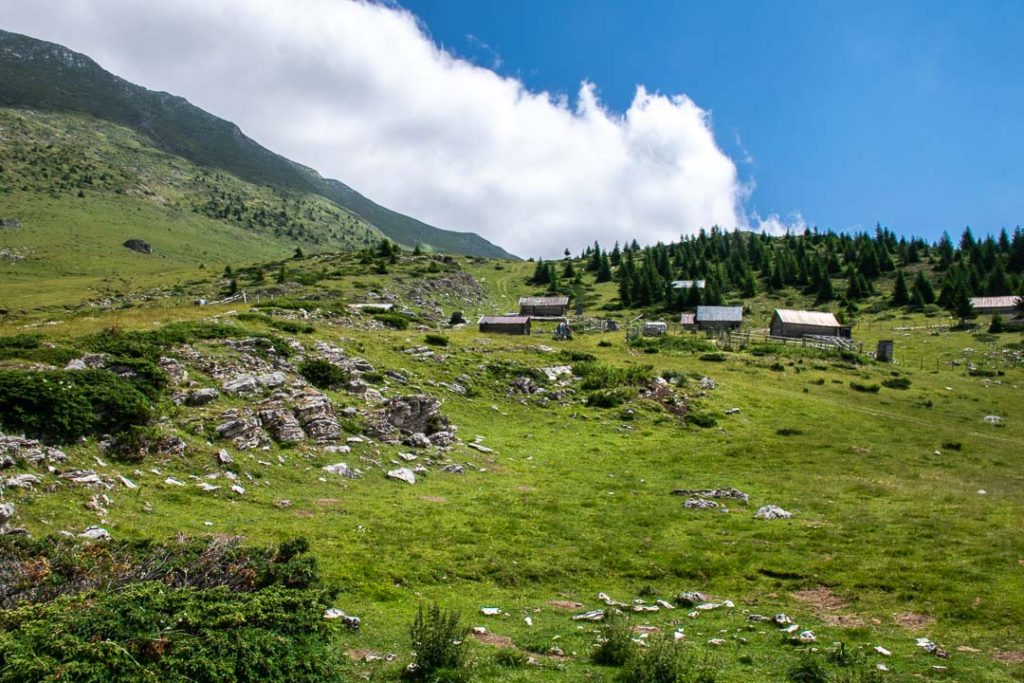 Having succeeded in reaching the summit of Hajla, it was time to return to our overnight stop in Drelaj. However, by the time we’d reached the meadows directly below the mountain something unexpected happened. Two young figures were coming towards us, one holding an axe that looked quite large relative to their size. Any caution we felt quickly faded as the two teenagers came over and greeted us with a friendly smile.

Arian and his younger brother had been doing chores and had noticed coming down the mountain. They were keen to chat to practice their English and soon enough they were inviting us to have coffee with their family. Soon enough we were back in the community of Vranoc, sitting at a table outside their holiday cabin drinking coffee. It was no longer just us and the brothers, but now also their father and several of the neighbours. 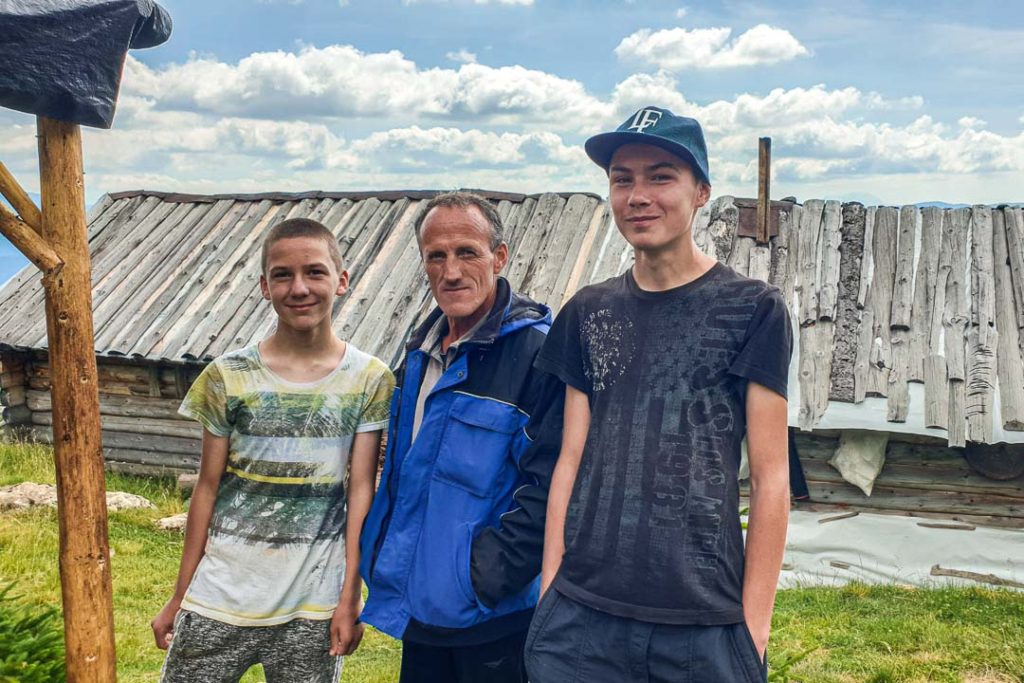 Their family live back in Peja but spend their summers together here in the mountains. I was quite curious about their large cabin, so sure enough, we were soon getting a tour inside and meeting the rest of the family. Arian spent the time happily translating for us, as his father told us about it. During the war all the homes up here were destroyed, so everything is relatively recently rebuilt. That said, it apparently only took the family one week to put this cabin up!

With a couple more hours of hiking still left, we soon said our goodbyes. Meeting Arian and his family was such an unexpected moment and yet another time I’ve been fortunate to experience Balkan hospitality. I’m not sure I’ll ever get used to it, but it just makes me love this region even more. 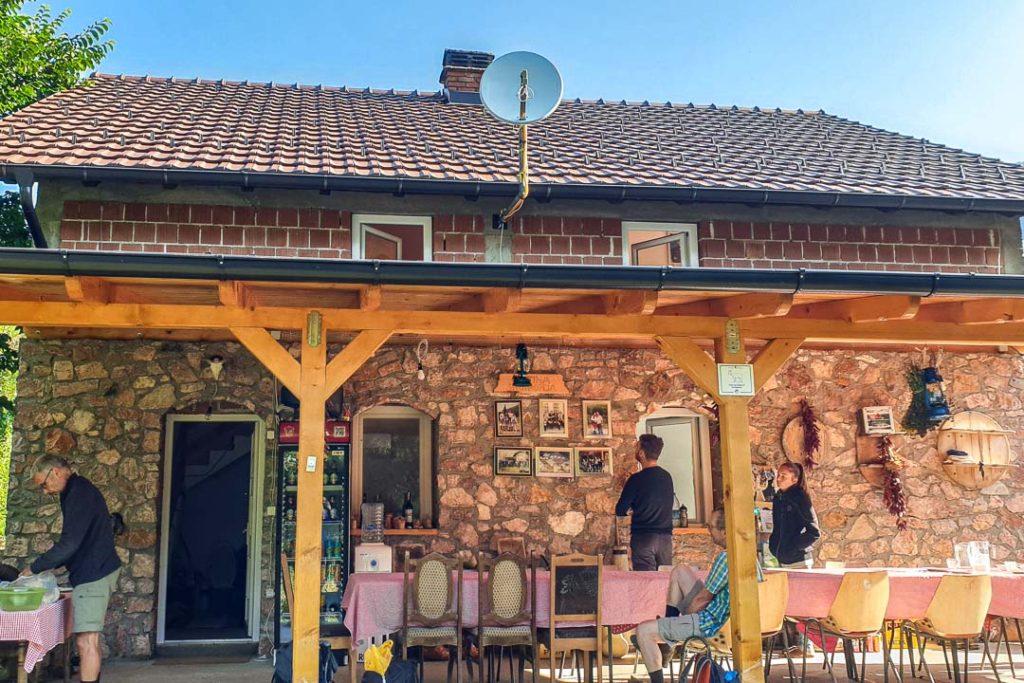 If you plan on doing a hike like this, you’ll first need to know how to get here. Your best option is to take the morning private minibus service up into Rugova Canyon from the Peja bus station. The 2019 timetable had a 7am and 3pm bus up, 8:30am and 4:30pm bus back, plus two extra summer services.

Check at the bus station or Rugova Valley Tourist Information Centre though to confirm the schedule. Taking the bus is more affordable than a taxi trip and there are multiple stops, including Drelaj where we got off.

For this hike our overnight accommodation was at Shqiponja Guesthouse in Drelaj. We were quite lucky to get a room mind you as we just turned up in the morning without any notice. Sitting along the Peaks of the Balkans route, this guesthouse can get busy, probably because it’s great value for money. Here you can get hot showers, dinner and packed lunches; what more could you ask for?

Are you surprised that Kosovo is such a great hiking destination? Would you be interested in doing a trip to go hiking in Rugova Valley? Please share your thoughts in the comments below.

Why Not Pin It for Later 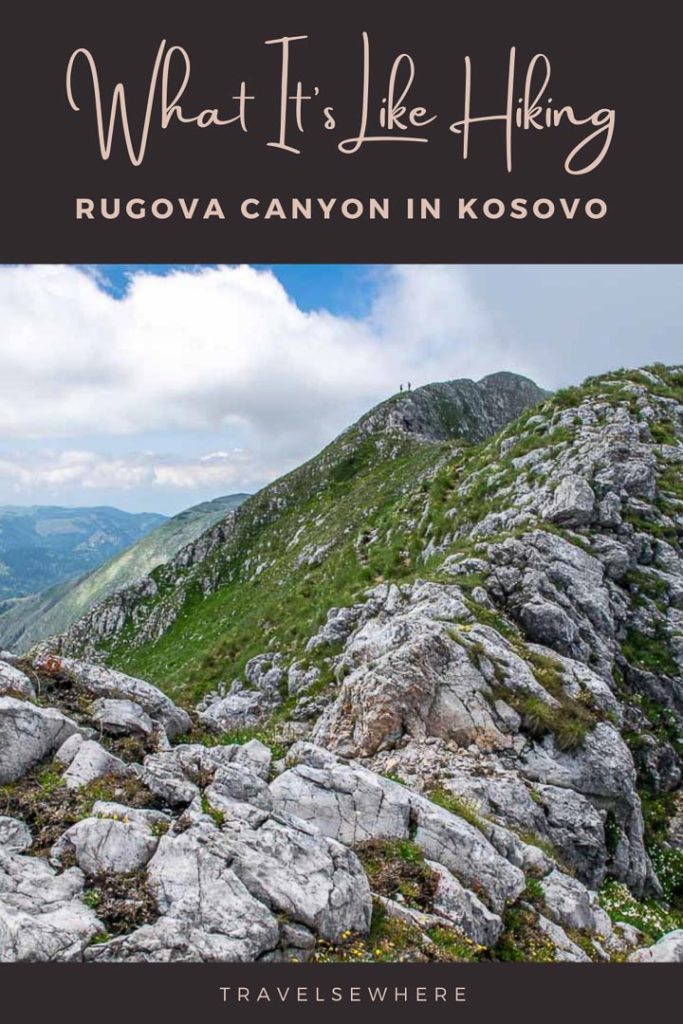 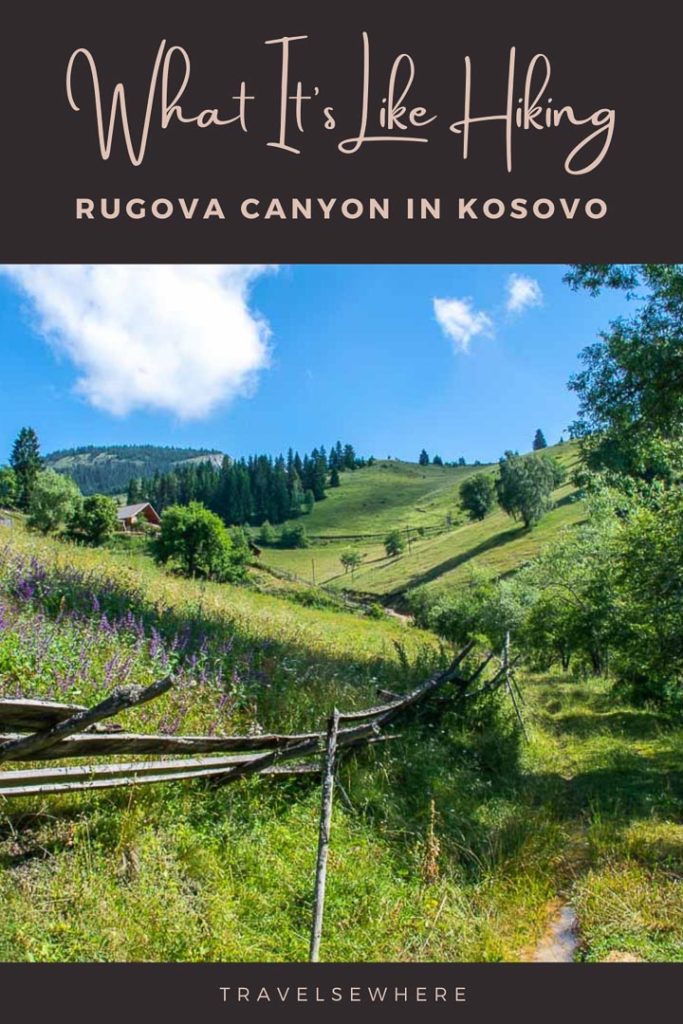 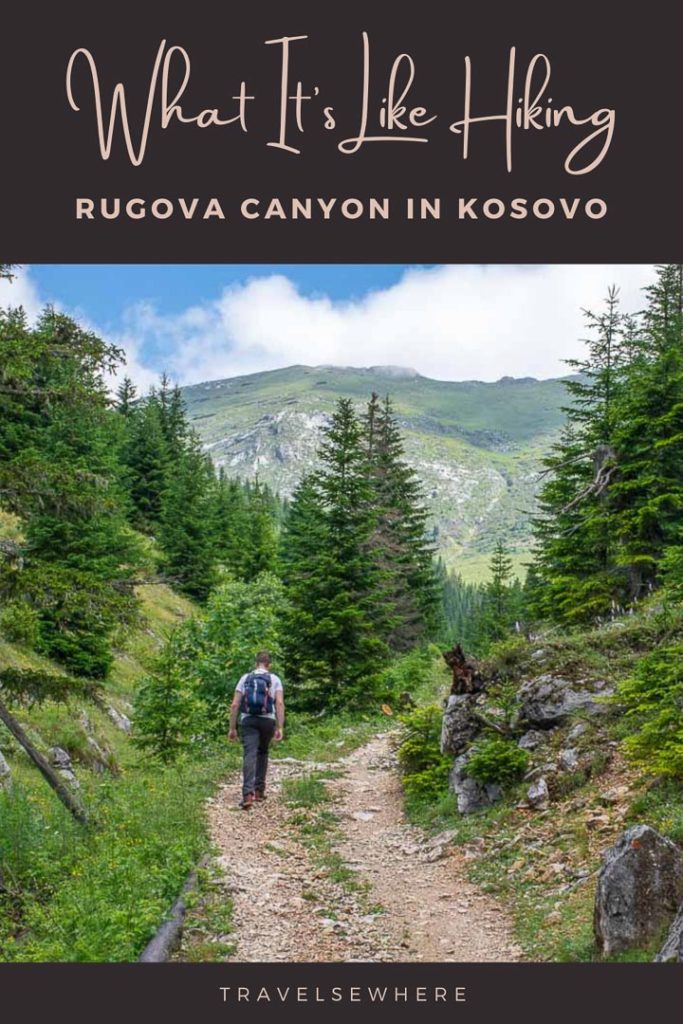 Hiking the Epic Peaks of the Balkans in...

The Few Sights to See Around Peja, Kosovo

Is There Anything to See in Gjakova, Kosovo?

Great Things to Do in Prizren, Kosovo

do you have links to onlines maps I can use for this trail?

Hi Kristien, I’m afraid I don’t have a specific GPX file for this hike. However, you can use the Reke e Allages – Leqinat i Kucishtes route of the Peaks of the Balkans as a loose guide as it covers some of the hike. https://www.alltrails.com/explore/recording/peaks-of-the-balkans-etappe-6-10-reke-e-allages-leqinat-i-kucishtes?referrer=gpsies