Popular Posts
Cycling and Camping on Rottnest Island, Western Australia
How To Make the Most of a Day...
How to Spend One Day in Lleida, Spain
9 Things to Know Before Visiting Slovenia
9 Things to Know Before Visiting Estonia
6 Compelling Reasons to Visit Zaragoza, Spain
How to Spend a Day in Bauska, Latvia
The Perfectly Pretty Harz Town of Goslar, Germany
5 Revealing Reasons to Visit Pristina, Kosovo
How to Spend One Day in Beziers, France
Home DestinationsEuropeCentral EuropeCzech Republic Watching a Dragon Be Vanquished in Trutnov, Czech Republic

Watching a Dragon Be Vanquished in Trutnov, Czech Republic 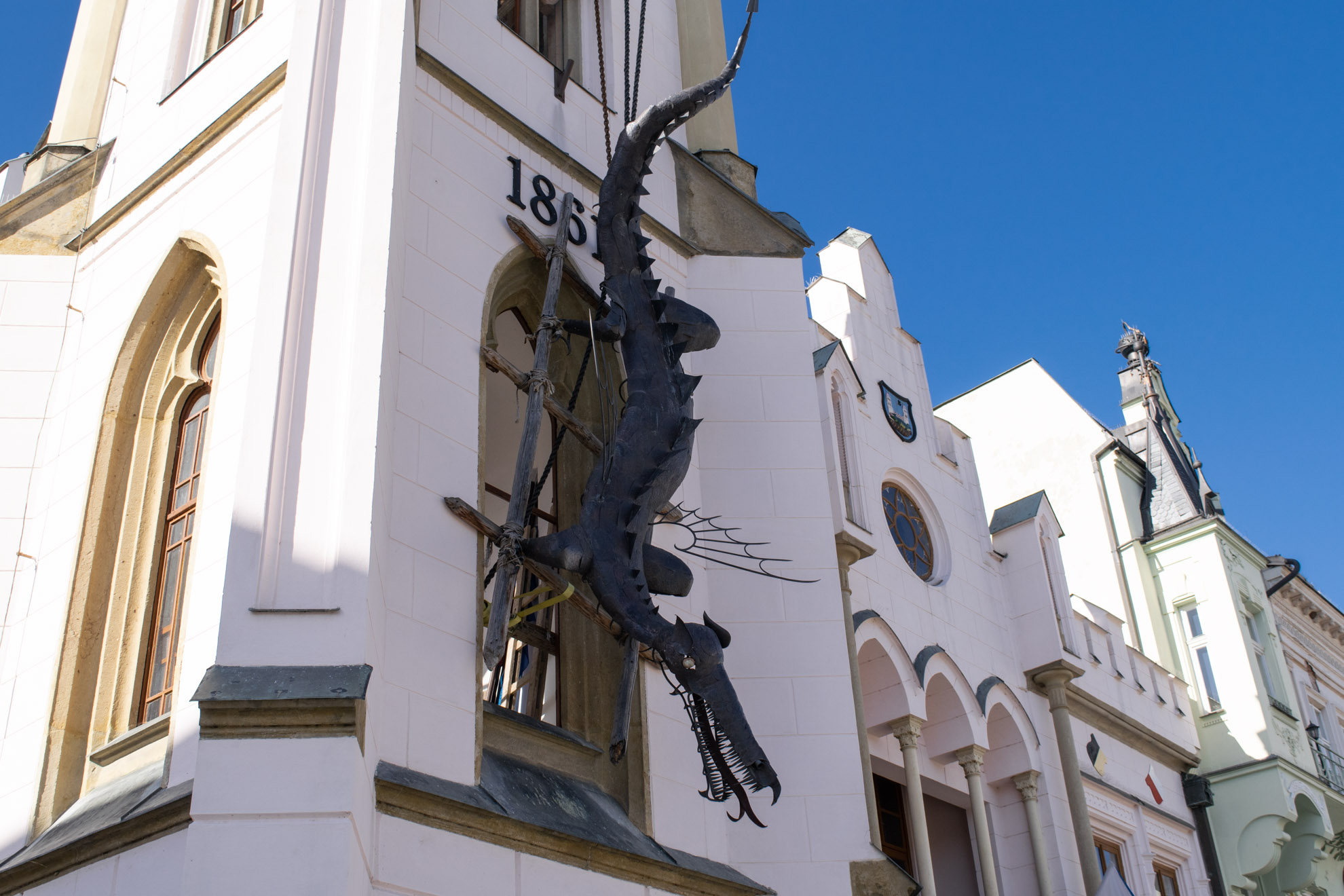 When you travel I think one of the best surprises you can be met with is a local festival. You turn up and the place is unexpectedly lively, with people everywhere and something fun definitely happening. Sure it helps if you understand what’s going on but I don’t think it’s entirely necessary. That’s essentially what happened to me when I arrived in the city of Trutnov in the northern Czech Republic. I was only staying in Trutnov as a base for visiting the Adršpach-Teplice Rocks National Park, but I got much more than I bargained for when I arrived for the local festival of “Už ho nesou“. 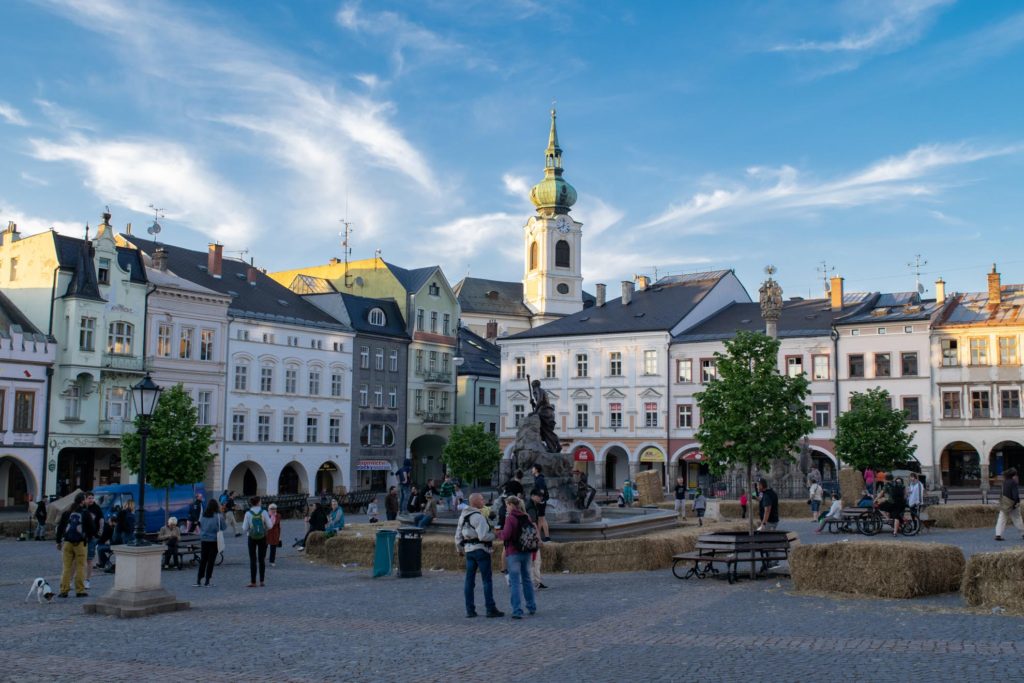 If you haven’t heard of the city of Trutnov in the Czech Republic, I can’t blame you. The city is only of a modest size and far enough from the Czech Republic’s hot spots that not many foreign tourists are likely to pass that way. The only other tourists I encountered in Trutnov were passing through for the Adršpach-Teplice Rocks and even then I don’t think they were staying in the city. The city is very much a gateway to the national park so I don’t think too many foreigners come for Trutnov on its own.

For people that do take the time to sightsee around Trutnov, they may be surprised with what they find. In true Czech form the city has some nice architecture, including the arcades that you find in many Czech cities. I have to say that the main square of Krakonošova Platz is quite the looker, especially around sunset. On the square you have several nice buildings, including the Town Hall, as well as the quite impressive fountain in the middle.

From the square you can head down Horksa street and head through much of the city centre. Trutnov isn’t that big so no worries about needing a lot of time. Then there’s the Kostel Narození Panny Marie Church back near Krakonošova Platz, where you’ll find a nice terrace with views down to the Upa River. 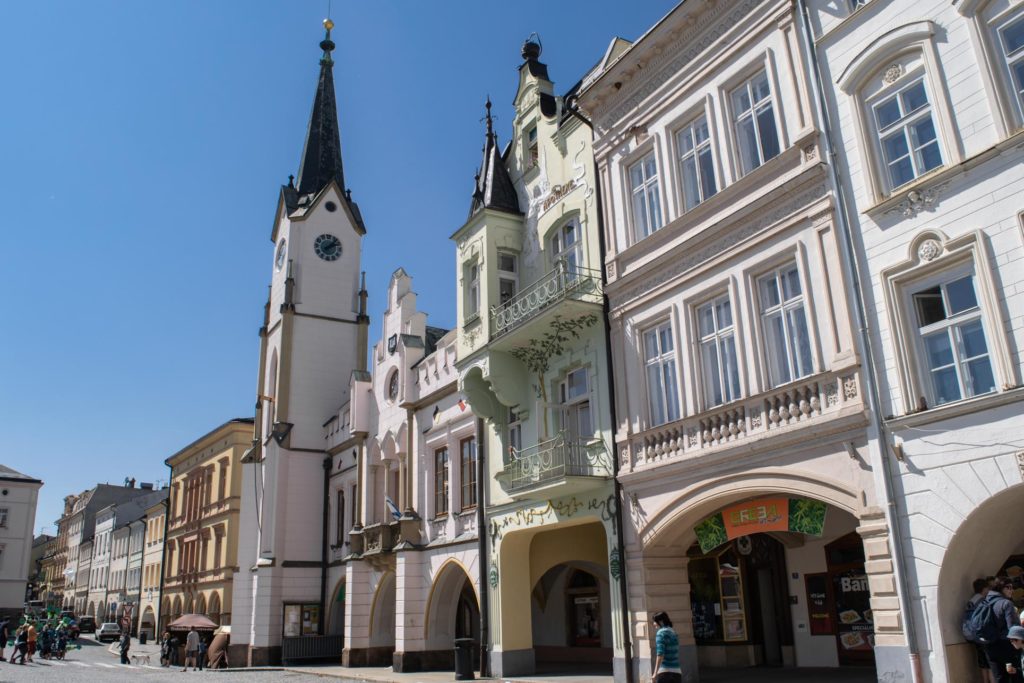 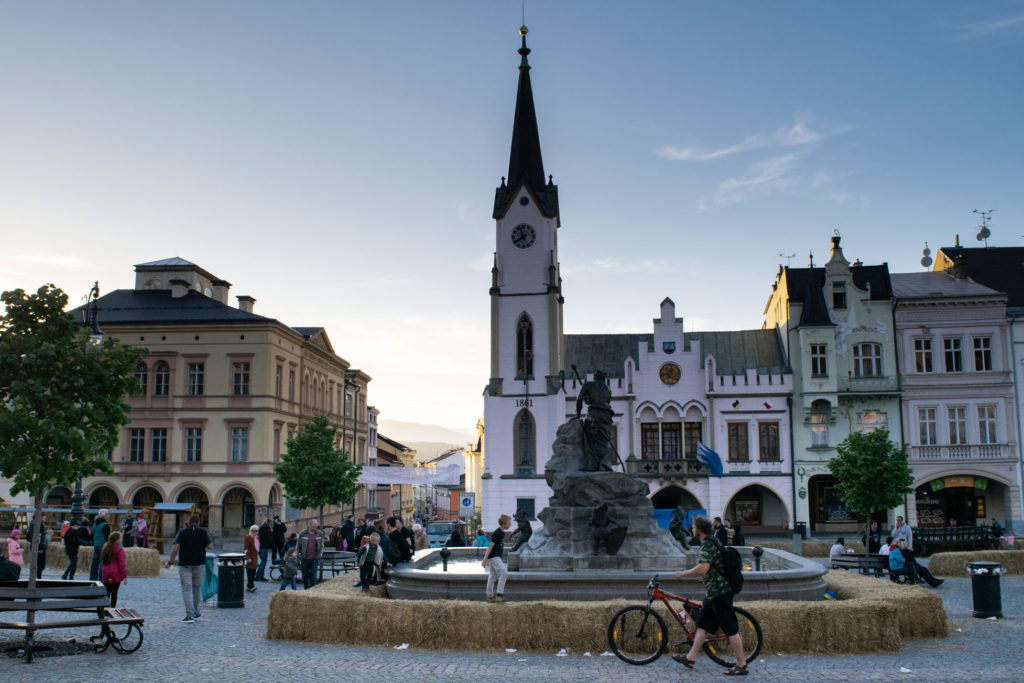 When I first arrived in Trutnov things seemed a little lively, until I started up Horksa street and found stalls along both sides. With people dressed up I immediately took it for some sort of medieval fair and I wasn’t too wrong. This led up to the main square which was full of hay bails and stalls, music and jesters, making the square feel much larger than it was. All of this was for the festival known as “Už Ho Nesou” but what exactly is that?

The festival of “Už Ho Nesou” is strongly tied to the local legend of the Dragon of Trutnov. This legend is so important to local folklore that there’s even a dragon on the city’s coat of arms. The story goes that two masons came across a dragon one day inside a steep ravine. They returned to Lord Albrecht back in town and swore an oath on what they said they saw. They built a trap outside the dragon’s cave, lured it outside. When the trap was sprung, ropes and chains bound the dragon holding it in place. They then proceeded to crush and suffocate it to death, skinning the dragon and stuffing the carcass. The stuffed dragon was first mounted on the old tower of Trutnov before being gifted to the city of Brno. 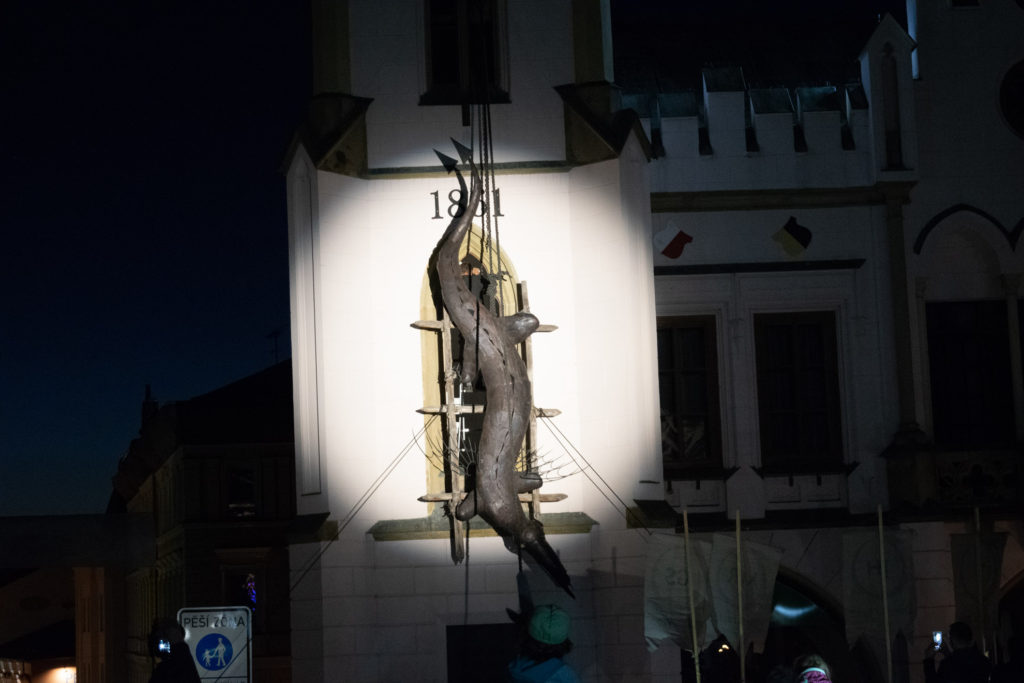 To celebrate this local legend, the city of Trutnov holds this festival “Už Ho Nesou” which apparently translates to “they care carrying it already”, I guess referring to the dragon. Each May they hold this festival, mounting a tin dragon onto the town hall, where it stays until September. This year’s festival actually takes place tomorrow May 4th, so if you can I recommend you go visit!

Experiencing The Mounting of the Dragon 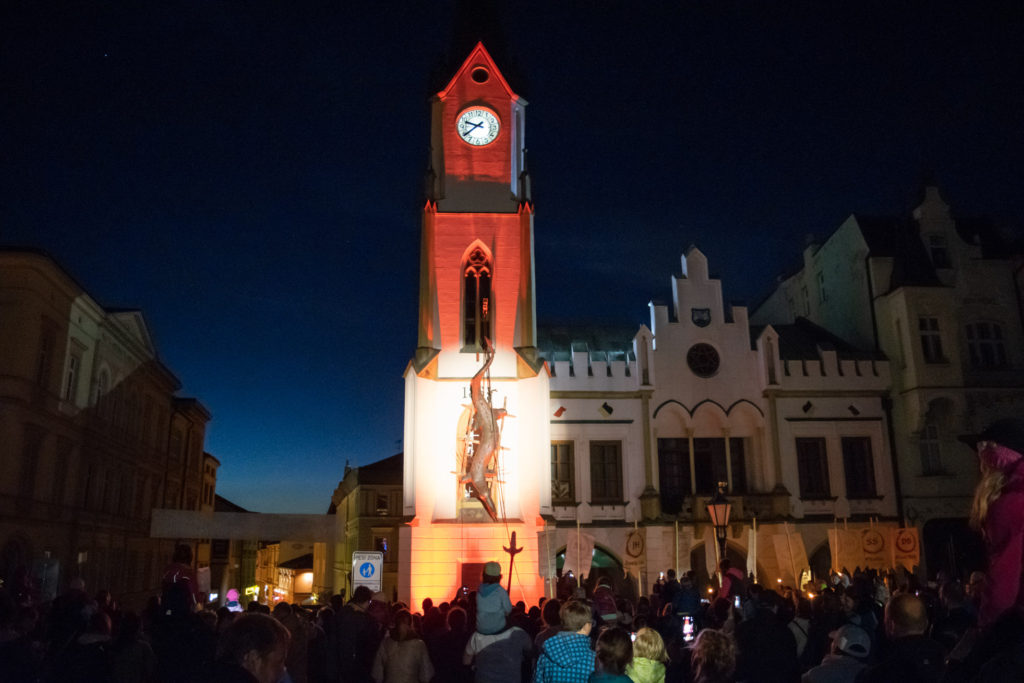 Having seen all the goings on during the day, I asked someone about the festival. They weren’t able to give me too much information but said I should head back to the square around 8 pm to see the main event. Having headed down to the square at 8 pm and waited a while, I gave up and went back to my room. I’d almost forgotten about it until I heard a loud procession entering the square just before 9:30 pm, with bells ringing and people chanting. That was clearly my queue to get down to the square pronto!

When I stepped out onto the square, I found a large crowd surrounding the main hall, mostly in darkness. While most were onlookers, there were some people closest to the town hall dressed up and carrying banners. Soon a spotlight appeared on the main tower of the town hall and ropes started to draw the dragon up. This coincided with the men holding banners chanting again and a great amount of shouting coming from the crowd. 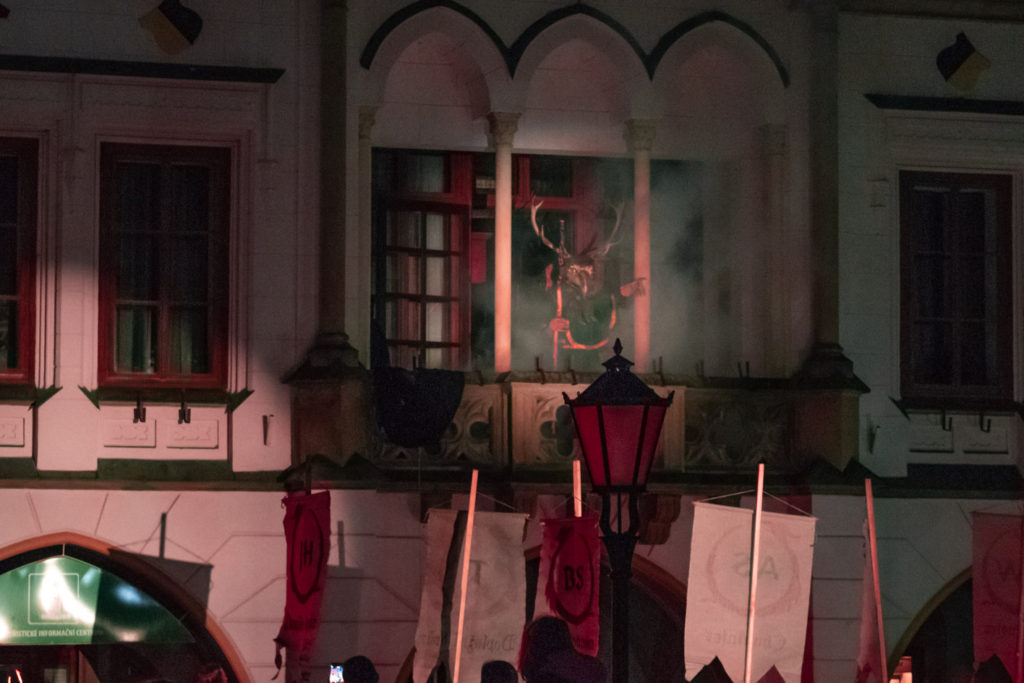 Then a figure emerged through smoke from the town hall balcony, a man dressed in something almost pagan-looking, complete with antlers protruding from his head. He gave a stately to the crowd and finally the dragon was firmly mounted on the town hall. I have no idea how long all of this lasted as I was so engrossed in what was going on and simply trying to make sense of what I was seeing. Once the dragon was up, things started to die down again, with the only stalls still open now selling tdrlnik chimney cakes and beer. 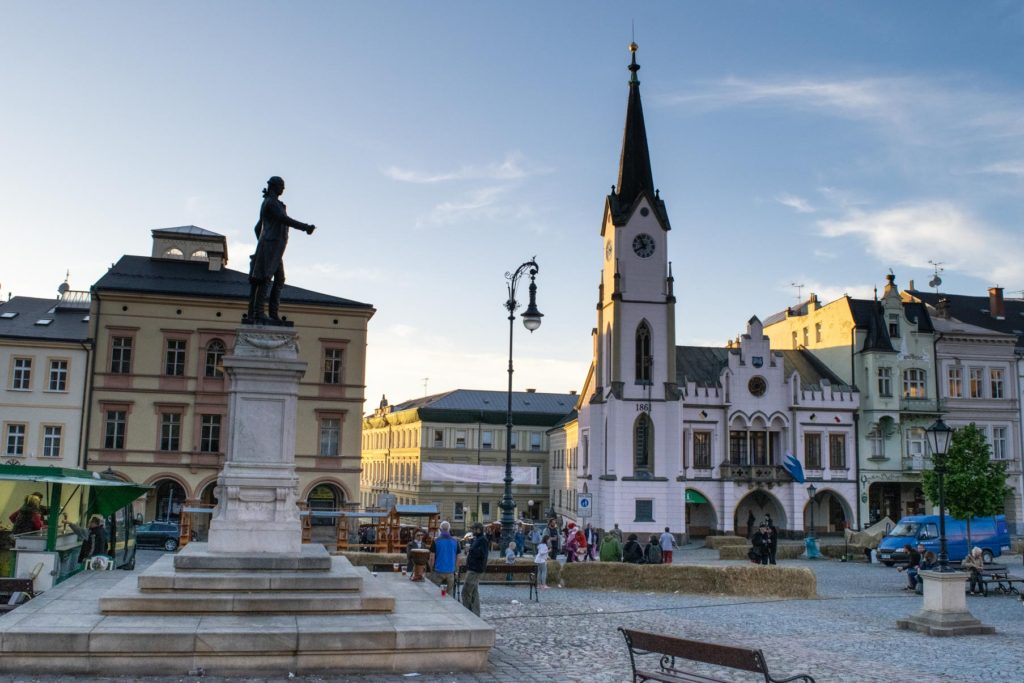 To reach Trutnov and the Adršpach-Teplice Rocks, the best places to reach them from are Prague and Liberec. Both cities are connected to Trutnov by regular 3+ hour train rides. There are also some connections over the border to Walbrzych from the Adrspach train station Poland but only on certain days.

As for accommodation, if you choose to stay in Trutnov either for the national park or the festival, I heartily recommend the Grand Luxury Hotel as it’s right on the main square even though its decor is a little dated. It’s a big hotel with its own sense of grandeur and some nice staff too.

Have you ever stumbled onto a local festival before? Do you think you’d consider visiting Trutnov for the Dragon Festival? Please share your thoughts in the comments below.

Disclaimer: This post contains affiliate links. If you click on one and make a purchase, I may make a small commission. Of course, this will come at no extra cost to you.

This article is now available as a mobile app. Go to GPSmyCity to download the app for GPS-assisted travel directions to the attractions featured in this article. Why Not Pin It for Later 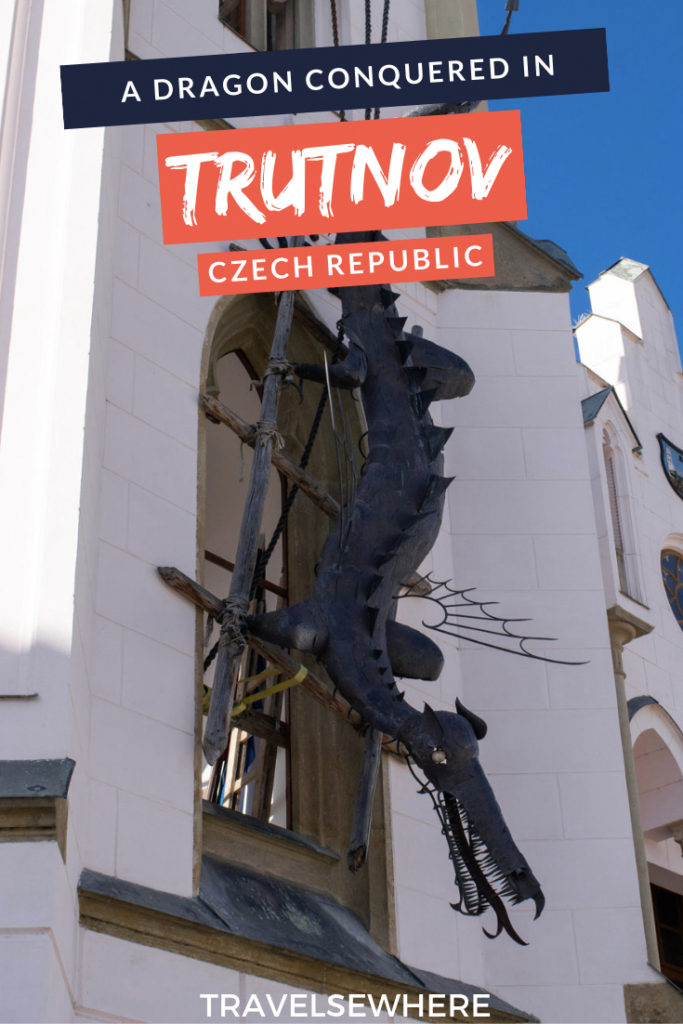 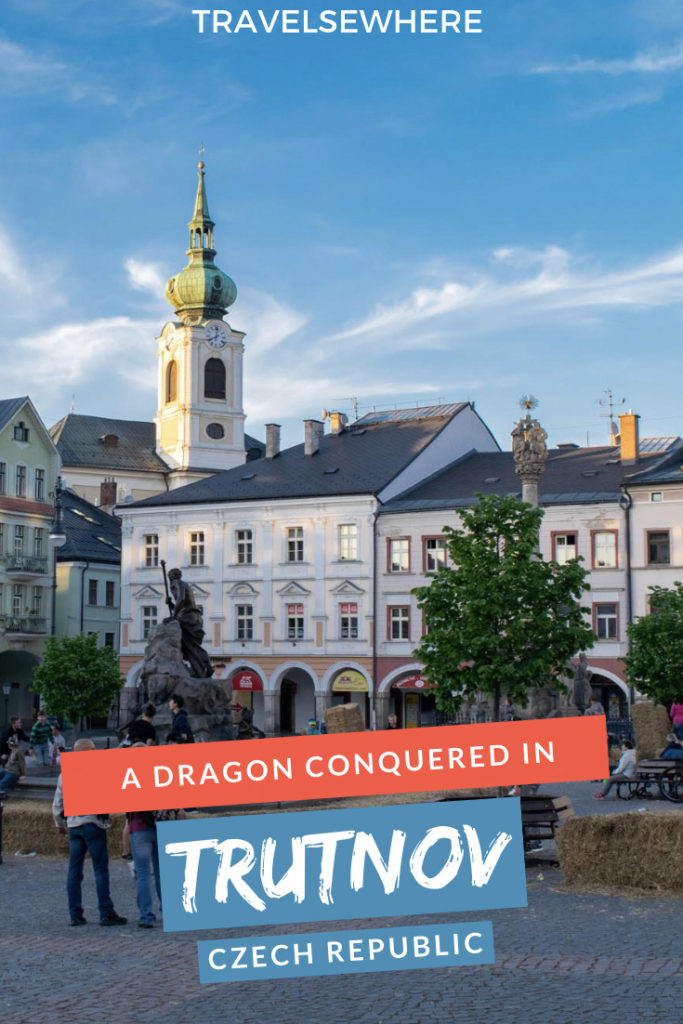 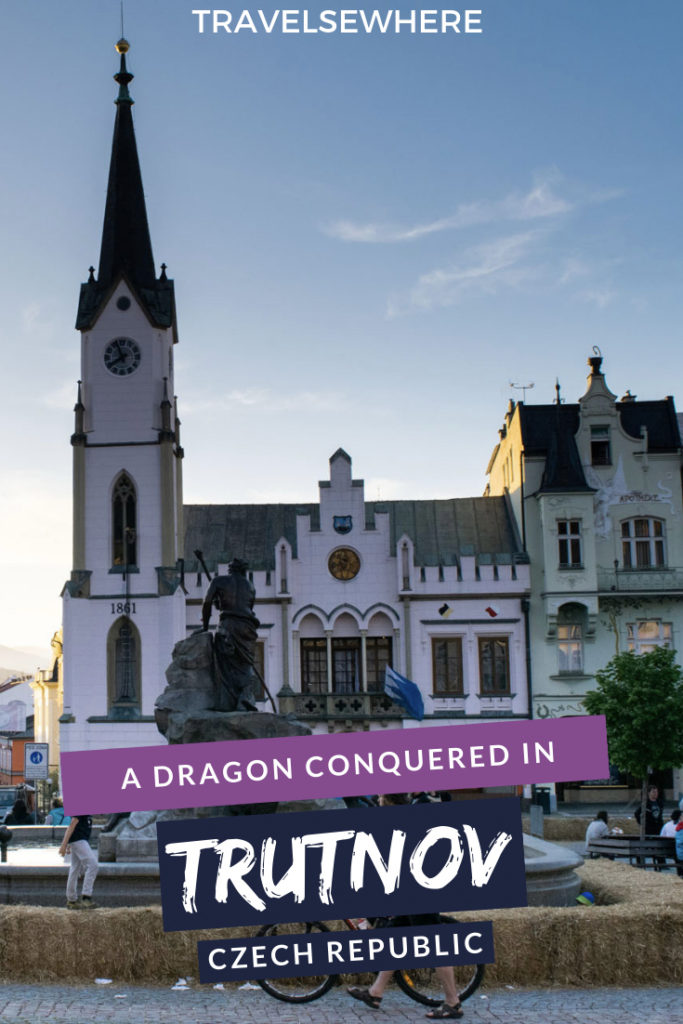 9 Things to Know Before Visiting the Czech...

How to Go Hiking in Bohemian Switzerland, Czechia

Best Places to Visit in the Czech Republic...

Is there Anything to See in Liberec, Czech...

Surprisingly I have heard of this little festival, or at least I should say, seen it on TV at some point because I recognize that dragon on the city hall! But to know more about it in English is great, especially the legend!