Popular Posts
How To Make the Most of a Day...
5 Revealing Reasons to Visit Pristina, Kosovo
Where to Stay in Tallinn on Your First...
Tourist Attractions in Hobart You Shouldn’t Miss
The Treasured Sights of North West Tasmania, Australia
A Day in Cradle Mountain National Park, Tasmania
Stella Artois Brewery Tour in Leuven, Belgium
11 Things to Do in the Three Cities,...
The Many Rewards of Hiking Schafberg in Austria
Visiting the Gothic Masterpiece of Corvin Castle, Romania
Home Croatia A Peaceful Day Trip to Trogir from Split, Croatia

A Peaceful Day Trip to Trogir from Split, Croatia 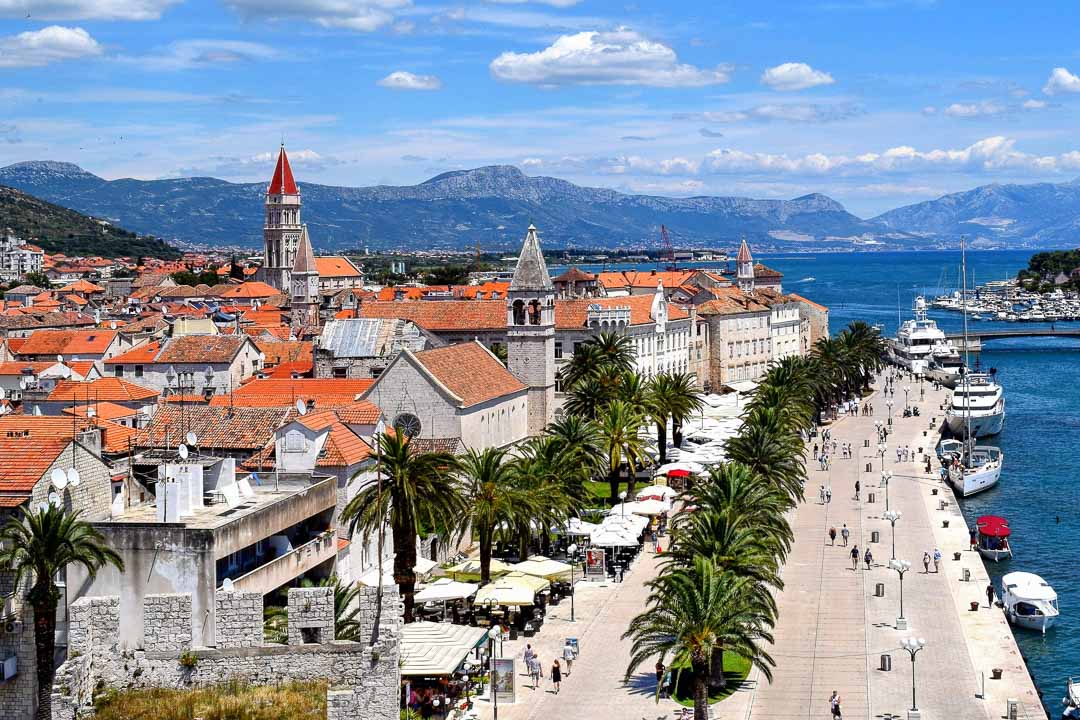 It’s hard to go past a visit to the coastal city of Split on a trip to Croatia. Not only a beautiful city in its own right with the remarkable UNESCO world heritage site of Diocletians Palace, it is also a popular starting point for sailing trips on the Adriatic Sea. But on top of that, Split also makes for a great base to explore more of the country by land. One particularly comfortable and enjoyable day trip from Split is to the nearby town of Trogir.

Located to the west of Split, Trogir also lies on Croatia’s magnificent Adriatic coast, but happens to stretch across two islands. In a sense Trogir is quite similar to Split, but with one major difference – the summer hordes, I mean tourists. Yes, Split can get super busy with people ready to sail off down the coast. Trogir’s tourist numbers however, are far fewer. And yet it still has a lot of the same things that make Split such a good holiday spot. Making a day trip to Trogir from Split is just one of many great ideas worth having on your Croatia itinerary.

A Day Trip to Trogir 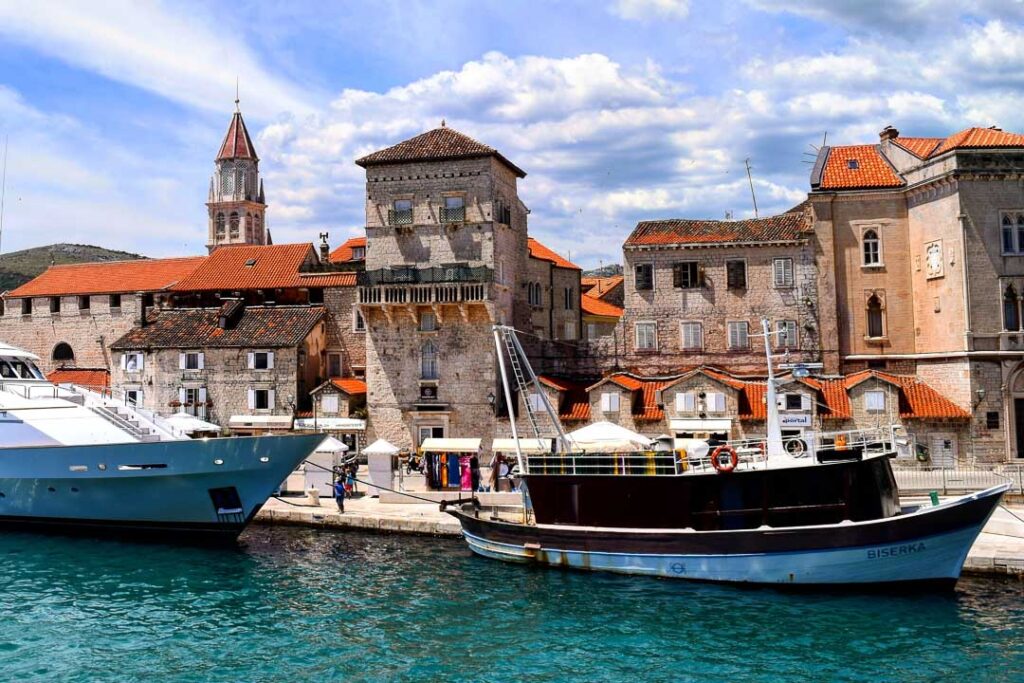 While its old town may not be as vast as Split or Dubrovnik’s, Trogir enjoys a quieter, lackadaisical atmosphere. Situated on a small island and adorned in marble, it’s another beautiful example of Venetian architecture. It may not have Diocletian’s Palace, but it too has made its way onto the UNESCO world heritage list. It won’t take long to see why. Walking through its narrow streets and elegant courtyards you’ll see plenty of charming buildings and balconies. 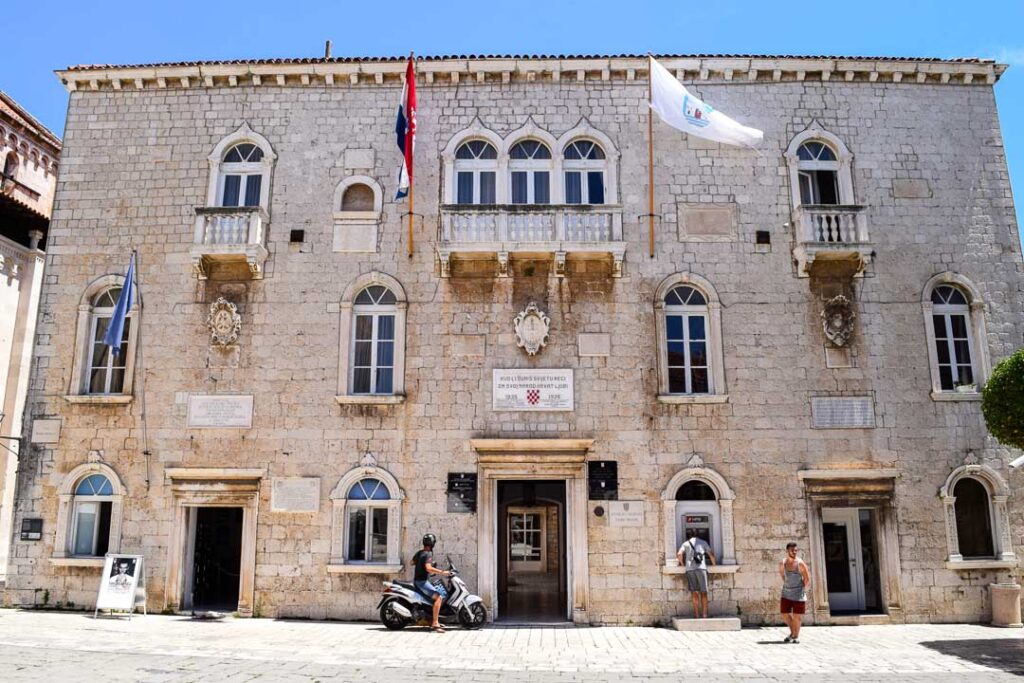 This charm extends to Trogir’s waterfront promenade, with its large palm trees and casual public spaces. There’s also copious amounts of seating for al fresco dining at the various waterfront restaurants, so plenty of choice for lunch that’s for sure. The waterfront is also a great place to admire the exquisite Venetian architecture, not to mention the yachts that have moored there. 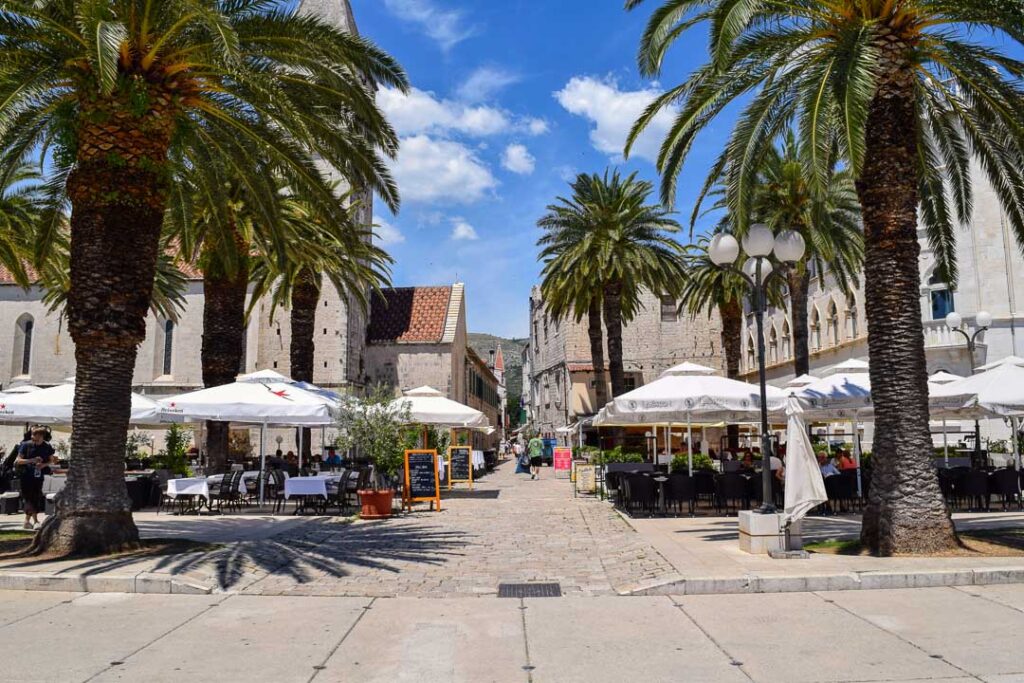 Things to Do in Trogir 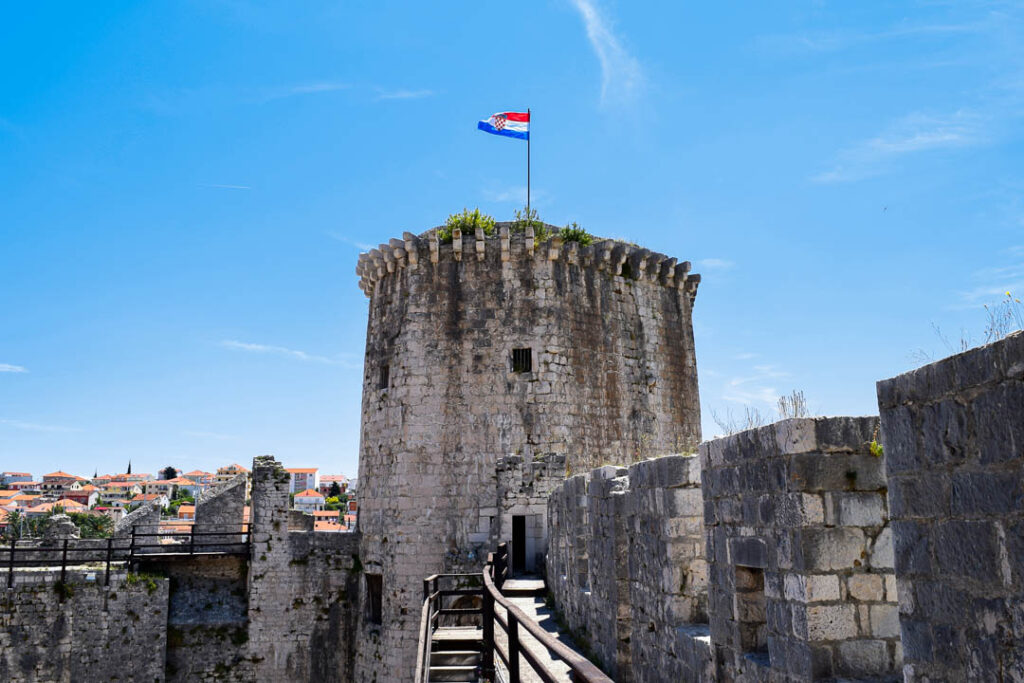 At the end of the promenade is the hard-to-miss Kamerlengo Castle, built by the Venetians in the 15th century. While it may have once been an imposing fortification, it has lost a bit of its ferocity over the years. Still, it makes for a great viewpoint from the top of its walls and towers, with entry costing 25HRK.

For those seeking to explore more of Trogir after the old town, the nearby beaches including on Čiovo Island are a great option. Čiovo Island is connected to Trogir by a small bridge and is home to a few neighbourhoods of Trogir as well as villages further away. The nearest beaches I knew of were Rozac beach and Okrug Beach, around 2-3km from the bridge from Trogir. As it turns out, there are plenty of beaches nearby. 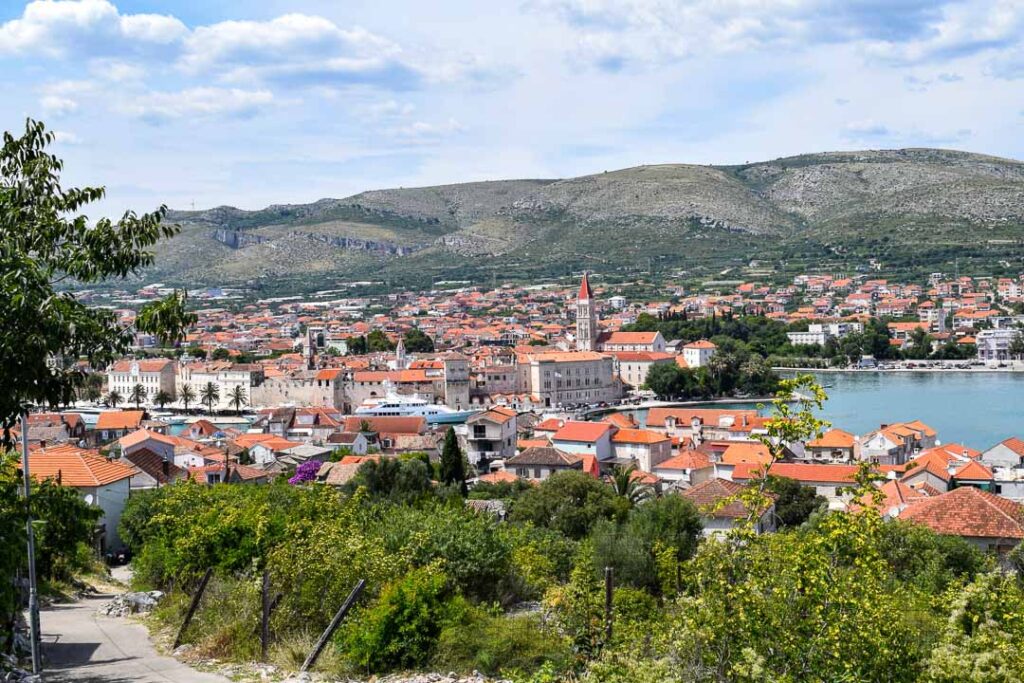 The only downside is that there’s a decent hill in between, so walking can be a little taxing in summer. Still the views back to Trogir are pretty sweet. There are small boats that run regular services between Trogir and Okrug Beach, but prices vary. I walked as far as Rozac Beach and found somewhere to relax and eat the lunch I’d bought in town. I hadn’t planned or prepared to swim, so was content with the view of the small beach and once done made my way back to Trogir for Split. 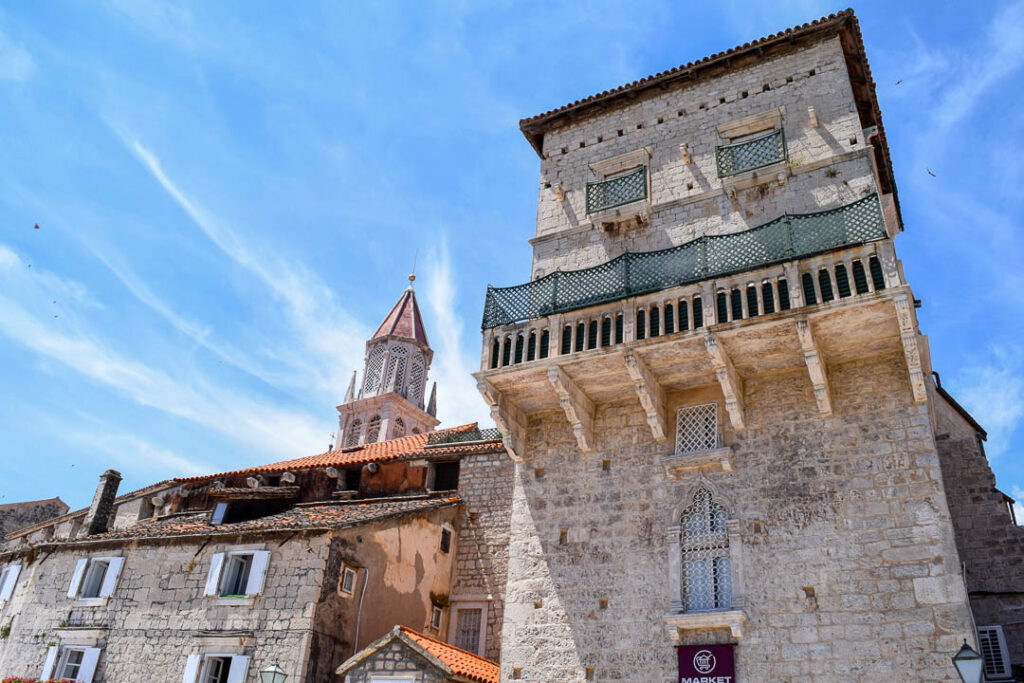 Have you visited Trogir or been on any other day trips from Split? If not, which of Trogir’s attractions speak most to you? Please share in the comments below.

Making the Most of One Day in Pula,...

Is there Anything to See in Karlovac, Croatia?

The Unexpected Pleasure of Rijeka, Croatia

The Waterfalls of Rastoke in Slunj, Croatia

The Benefits of Travelling to Croatia in Winter

Such beautiful Venetian architecture! We drove the Croatian coast a few years ago but didn’t stop in at Trogir. Next time we’ll be sure too – we much prefer to avoid the crowds!

What a pretty little town 🙂 I have yet to travel to Europe, but it sure looks wonderful.

We were in Trogir in August last year and it is really lovely (though Split totally won my heart!) It is a gorgeous town – we didn’t manage the walk up the hill as it was far too hot but the views look beautiful! #feetdotravel

I heard about this place after we went! So glad to learn more about it! It looks beautiful! Pinned as usual! Next time I go to Split, we will be staying longer because there are so many amazing day trips from there! Thanks for linking up with #TheWeeklyPostcard!

Croatia is still on my list and this does sound like a great day trip. Nice to hear that it is not as crowded as Split. The castle is beautiful too and I would love to visit the beach. I am going to pin this for later, thanks for sharing on #TheWeeklyPostcard.

Wow, this is so beautiful. I’m headed there next week. Hope to have such a beautiful weather as you did. #TheWeeklyPostcard

The waterfront looks beautiful! Would love to visit Croatia one day.

Looks beautiful! I am all about this lesser visited, smaller towns. The town doesn’t look very crowded from your pictures. #TheWeeklyPostcard

Trigger seems like such a cute little town. I’ve pinned this for future reference when we finally start planning a trip to Croatia.

I’m so excited to say that, if all goes as planned, we are going to Croatia next year! This post is perfect timing – so beautiful and inspiring. Can’t wait to go check out some of these spots!

What a beautiful town! We definitely have “a thing” for seaside towns, especially those with a walkable old town section. This one looks great – would love to spend some time exploring! #FeetDoTravel & #TheWeeklyPostcard

So happy to ad this to my Croatia itinerary. I hope the weather isn’t too hot in May for that hike.

Great post David! I was in Trogir a few years ago. This is my favourite town in Croatia. It’s a trully beautiful…

I really like the look of this place – thanks for sharing the tips. I have only seen Dubrovnik, and although it was beautiful, it was very busy with tourists. I think I’d love to just wander around here and take it all in with the calmer atmosphere you describe. Straight on my bucket list 🙂

I have only spent a few hours in Split so unfortunately barely had time to explore it, let alone any surrounding areas but it definitely looks like somewhere that I would enjoy strolling through! Less tourists = a good thing!

Wow! My friends told me Trogir was tge most beautiful place they had ever been. I drove through it but didn’t stay. I will certainly have to stay next time!

I have wanted to visit Croatia for a while now for many reasons, and now that we are travelling full time, we are preferring places less touristy, so Trogir sounds perfect. Great history, great views and great pictures, I can’t wait to visit! #feetdotravel

Trogir looks wonderful! as does Split. Hoping to make it to Croatia soon, maybe next year, thanks for all the tips will pin for reference.

We had a taste of Croatia last year and loved it. Split and Trogir look superb thanks for the tips! #feetdotravel

What a lovely small town. It sounds like a great place to visit and be able to take in its charms at a leisurely pace, which is my kind of traveling.

I love the idea of the “quiet, lackadaisical” atmosphere you mentioned. You are inspiring us to travel more off the beaten path 🙂 Thanks!

This looks like such a beautiful place! I always love the idea of getting out of the city when travelling but I’m not always sure how to find places like this to go to. How did you find out about it?

Actually how I found Trogir and many of the more offbeat places I go to is just looking at Googlemaps. I just look at places nearby, be they cities or national parks and then google them to see if I should visit. Thanks for asking Annalise.

I think is time for me to visit Croatia after all the lovely posts I read lately. You seemed to had a great day trip to Troger, the architecture is stunning and the view is indeed sweet. Thanks for sharing.

I’ve been thinking of revisiting Croatia for a while now, it really is a gem of a country.

My next trip to Europe is including so many places your blog has introduced me to, Trogir is another to add to the list. That castle looks like a place to capture some great views of the city and I will certainly be trying out one of the bakeries. You can always get a great ‘taste’ of a place at a local bakery instead of restaurant food all the time. In fact, we rarely eat at restaurants when we travel.

We visited Trogir last year when we were staying in Split for a holiday. Absolutely fell in love with this magical place! I think I found some of my favourite beaches there! And the best memory we had from our short visit to Trogir was this island boat tour: https://www.seabookings.com/experience/island-tour-from-trogir We saw so many amazing places! can’t wait to go back again this summer!

Loved reading your post! It was full of details about the beautiful Trogir. I am a local from this area, and it was really interesting for me to see your point of view about this magnificent town. Take care and keep on writing these beautiful posts.